Zoological parks are areas which provide animals with conditions as close as possible to the natural habitats. There are 275 zoos, deer parks, safari parks, aquaria etc. Government of India has set up a Central Zoo Authority to secure better management of zoos. The zoological parks are centres of education and recreation, they also play an important role in the conservation of species such as Manipur Thamin deer and the white winged wood duck. Successful breeding has also been achieved in captive breeding of some endangered animal species like Gangetic gharial, crocodiles, turtles and white tiger. 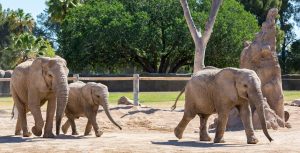 An arboretum is a place or a plot of land which has a collection of rare trees or shrubs for scientific and educational purposes.

Seeds are of two types orthodox seeds and recalcitrant.  Orthodox seeds are those which can tolerate reduction in moisture content, aerobic conditions and low temperature for prolonged period. For example, cereals, legumes etc. At intervals the seeds germinate, form plants and develop fresh seeds for storage.

Recalcitrant seeds are those seeds which on reduction of moisture and exposure to low temperatures die. For example, tea, cocoa, jack fruit, coconut. Storing of the seeds for shorter duration requires treatment with fungicides in rooms having humid air and normal oxygen.

Orchards contains plants with recalcitrant seeds. It has a collection of all possible strains and varieties . For example, litchi, oil palm, rubber tree, etc.

It is carried out through callus formation, embryoids, pollen grain culture and shoot tip culture for those plants which are either seedless, have recalcitrant seeds, variable seed progeny or where clone is to be maintained.

The method is useful in maintaining a large number of genotypes in small area, rapid multiplication of even endangered species and for hybrid rescue. Shoot tip culture maintains virus free plants. It is used for international exchange of germplasm in vegetatively multiplied cultivars, for example,banana, potato etc.

Cryopreservation is the storage of material at -196 degree centigrade. It is a useful method for long term storage of a wide variety of plants such as buds, seeds, seed parts,twigs, tissue cultures, cells, DNA, etc., and animal germplasm such as living sperm, ova, embryo.

Seeds of several plants deteriorate very quickly using traditional storage methods. Cryopreservation has been very useful in storing such seeds and other types of germplasm for long periods.

Cryopreservation is done at -196 degree centigrade in liquid nitrogen. Two important factors which determine survival of the germplasm at such a low temperature are pre-treatment of the material and rate of cooling. Pre-treatment requires cryoprotectants such as sucrose. Cooling usually requires two steps. In the first step cooling of material at -40°C takes place for 2-3 hours before placing it directly in liquid nitrogen at -196°C. At very low temperature the material dehydrates as water moves outside from the cell. On warming the material, water moves back into the cell restoring the cellular metabolism. Zoological Society of San Diego has “Frozen Zoo” to store samples of more than 350 animals, including mammals, reptiles and birds.

Fresh spores which are similar in size to pollen can be treated just like pollen. Germination occurs even in the spores of tropical ferns such as Staghorn and Platycerium species after drying and freezing.