This hypothesis was first proposed by Peter Mitchell (1961).  The thylakoid membranes within the chloroplast are involved in electron transport.  ATP synthesis occurs through chemiosmotic mechanism in chloroplast.  According to Peter Mitchell, the energy transducing membranes are impermeable to H+.  The electron carriers are organized asymmetrically in the membranes.  Beside the electron carriers, some proton carriers are also present, which translocate protons across the membrane against the proton gradient.  The ion concentration differences and electric potential differences across the membranes provide free energy.

In thylakoids, water molecules split in the lumen side resulting in the accumulation of protons in the lumen of the thylakoids.  As a result, the lumen becomes acidic (high concentration of positive hydrogen ions) and the stroma becomes more alkaline(low concentration of hydrogen ions). Thus a difference in the proton concentration across the membrane is developed.  Since protons carry a positive charge, it also contributes to an electrical potential gradient across the membrane.  These two gradients together constitute a proton motive force.  It requires a certain amount of energy to pump the protons into the lumen against a proton motive force.  This energy is made available by the electron transport.

The thylakoid membrane has a low conductance for protons.  As a result, the protons cannot simply diffuse back to the stroma.  The diffusion of the protons to the stroma takes place only with the help of highly specific protein lined channel that extends through the membranes.  These channels are a part of the ATP synthesizing enzyme, ATP synthase. 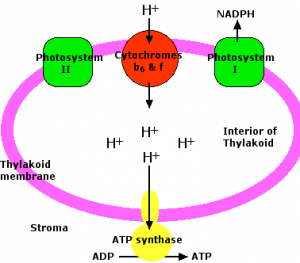 DIFFERENCE BETWEEN PHOTOSYNTHESIS AND RESPIRATION

DIFFERENCE BETWEEN GLYCOLYSIS AND KREBS CYCLE