This theory explains that the forces responsible for absorption of water into the roots are governed by other cells.  Water is continuously lost by the plants through the process called transpiration.  The loss of water from leaf surface or transpiring surface results in increased diffusion pressure deficit in the mesophyll cells, as a result of which water from the xylem elements diffuse into mesophyll cells.  The xylem elements inside the plants form a continuous column which remains filled with water.  Therefore, diffusion of water from the xylem elements at the top creates a tension on the water column present in the entire series of xylem vessels.  This tension along with diffusion pressure deficit pulls the water.  In this process, the force created at the upper part of plant plays important role and the root plays passive role.

This theory involves apoplastic movement of water, i.e., water moves through intercellular space and cell wall in the cortex and simplest movement through endodermis and pericycle. 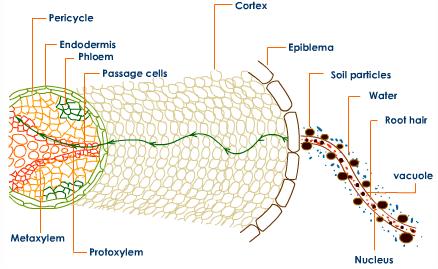 Absorption of water:  Entry of water into the root hair and its path to xylem through cortex

PATHWAY OF WATER ACROSS THE ROOT CELLS

Most of the factors which affect the rate of water absorption are soil factors, although atmospheric condition also affects the process.  Some of the important factors are as follows: