Some of the factors such as light, water, carbondioxide, temperature and chlorophyll control the process of photosynthesis.  In the absence of any one of these factors operation of the process is not at all possible.  Hence these are absolute requirements and they greatly influence the photosynthetic rate.  F.F, Blackman in 1905 proposed the ”Law of Limiting Factors” to explain the nature of operation of these factors. Following are the external and internal factors affecting Photosynthesis.

A plant cannot survive for long at compensation point because there is a net loss of organic matter due to respiration of non green organs and respiration in dark.

(iii) Duration of light:  Photosynthesis can occur in continuous illumination without any harm to the plant. 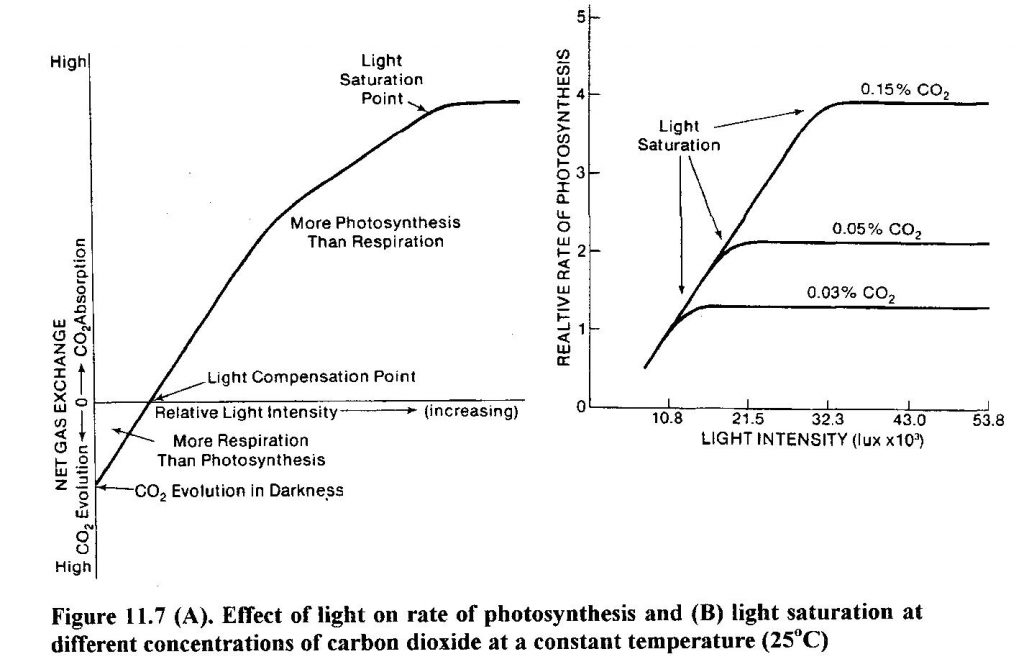 The effect of temperature varies with the habitat of plants .The plants of cold climate carry on photosynthesis at much lower temperature than those of warm climates.

In the evergreen species of cold regions , photosynthesis occurs below 0°C.  On the other hand, algae in hot water springs may carry on photosynthesis at a temperature of 75 °C. 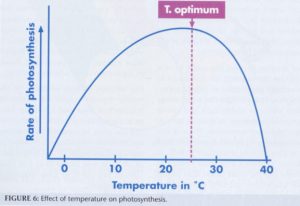 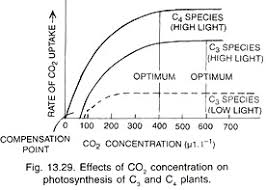 A very high carbon dioxide concentration causes the stomata to close.  This inhibits exchange of gases and as a result, the photosynthetic rate decreases.

This chemical energy in the presence of enzymes help to carry out various reactions of dark phase of photosynthesis leading to the synthesis of carbohydrates.  Quality and proportion of chlorophyll a and chlorophyll b present in leaves also influence the photosynthetic efficiency of plants. 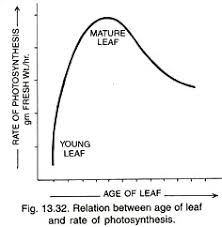 Certain protoplasmic factors such as quantity of photosynthetic enzymes also influence the rate of photosynthesis.   Such factors mostly affect the dark reaction.  Plants lose the capacity for photosynthesis at temperature above 30 degree centigrade or at strong light intensities even though all other conditions are normal.

When sugar is manufactured at a more rapid rate, it accumulates, in the mesophyll cells.  Concentration of these products in the cells increases the rate of respiration.  If the accumulation of products takes place beyond a limit, photosynthesis stops.

Structural features of the leaf affect the diffusion of carbon dioxide.  These include size of stomata, their position, amount of intercellular spaces, thickness of epidermis and cuticles.  Leaves with Kranz anatomy are more efficient in photosynthesis.

F. Blackman (1905) stated that “when a process is conditioned as to its rapidity by a number of separate factors, the rate of the process is limited by the pace of the slowest factor.” This law is termed as Blackman’s law of limiting factor. It can be explained by the following example.

Now if the carbon dioxide concentration is gradually increased, the rate of photosynthesis will also increase correspondingly until the assimilation rate of 5 mg carbon dioxide per hour has been reached.

The above experiment shows that of all the factors, the photosynthetic rate depends upon the factor which is present in relatively minimum concentration.  This factor is known as “limiting factor.”  All other factors present in optimum or maximum concentration will not be able to increase the rate of photosynthesis until the amount of limiting factor is increased correspondingly. 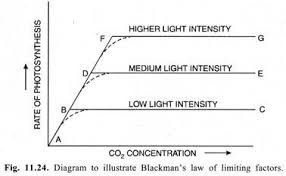