Factors Affecting The Rate of Respiration

However, above 30 degree centigrade, there is a decline in the rate of respiration.  This decrease is apparently due to denaturation and destruction of respiratory enzymes at high temperature.

Low temperatures also inhibit respiration.  It almost stops at freezing temperature because the enzymes become inactive at very low temperature.  It is due to this reason that fruits and vegetables can be stored in refrigerator for long periods without being spoiled. 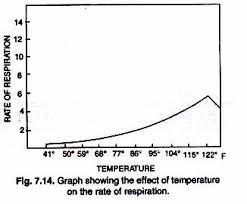 Fig: Effect of temperature on the rate of respiration

When a living tissue is kept in low concentration of oxygen, it respires anaerobically and therefore, the energy released is much less than that would have been obtained from the same amount of substrate under aerobic conditions.  To obtain more energy during anaerobic condition naturally more substrate would have to be burn.  The above fact shows that to conserve substrate, a sufficient supply of oxygen is essential.

Louis Pasteur, a French microbiologist observed that proper supply of oxygen is essential to inhibit fermentation of sugars by yeast cells (i.e., to stop anaerobic respiration).  This is known as Pasteur’s effect.

A very high concentration of oxygen is undesirable as it inhibits the activity of respiratory enzymes thereby reducing the rate of respiration.

Most of the plant tissues contain about 80-90% of water, therefore, small changes in water contents generally do not have any marked effect on the rate of respiration.

The respiratory rate of injured plant generally increases due to the following two reasons:

Protoplasm and respiratory substrates are the two important internal factors which affect respiration.

Respiratory substrates are the substances which on oxidation provide necessary energy for growth.  Soluble carbohydrates such as glucose, lactose, maltose etc., are the common respiratory substrates.  Increase in the amount of substrates (up to a certain extent) naturally increases the rate of respiration.