Gene cloning is the process of making multiple, identical copies of a particular piece of DNA. Using this technique we can isolate and clone single copy of a gene or DNA segment into an indefinite number of copies, all identical.

Gene cloning or molecular cloning is an umbrella term that encompasses a number of experimental protocols leading to the transfer of genetic information from one organism to another.

Following are the steps of gene cloning:

2. Cutting of DNA at specific locations

3. Amplification of gene of interest 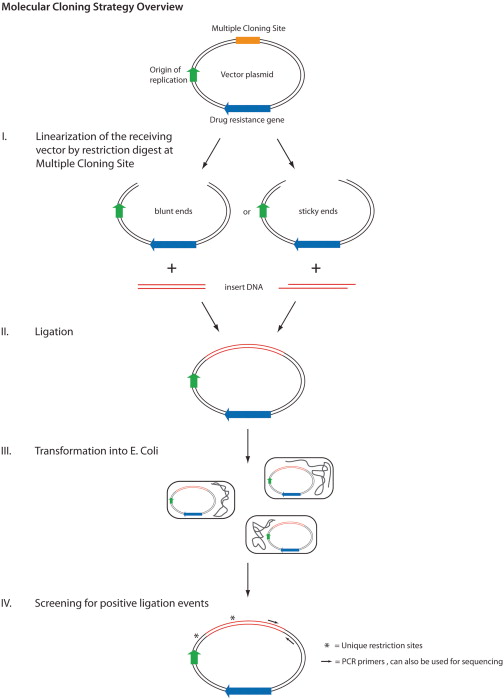 For molecular cloning, both the source DNA that contains the target sequence and the cloning vector must be consistently cut into discrete and reproducible fragments.  Several methods such as mechanical shearing, restriction digest, c dna synthesis, chemical synthesis, etc., are helpful in the isolation of the DNA fragments.

Cutting of DNA at Specific Locations

Another possibility in this experiment is the rejoining of the sticky ends of the vector molecule itself, forming a circular vector DNA molecule that is without foreign DNA molecule. Treating the digested vector with alkaline phosphatase or use of different restriction enzymes overcomes the above possibility.

This is the process of selective multiplication of a specific region of DNA molecule.  Amplification is achieved by a special method termed as polymerase chain reaction. The principle underlying the technique is to heat double stranded DNA molecule to a high temperature so that the two DNA strands separate into single strand DNA molecules. Such single stranded DNA molecules require primers made of 10- 18 oligonucleotides for hybridization of each strand of the double helix. It also requires enzyme DNA polymerase. It is a thermostable enzyme also termed as Taq polymerase. PCR amplification cycle involves three major steps- denaturation, annealing and extension.  At the end of the process it results in the production of 2n number of DNA molecules for n number of cycles completed.

The next step in a recombinant DNA experiment requires the uptake of the cloned DNA by E. coli. After preparing the r-DNA of a vector, it enters into a suitable host for expression of foreign DNA. The process of introducing purified DNA into bacterial cell is termed as transformation.

For E.coli one of the methods of transformation requires that the cells be treated with high temperature and calcium chloride. The strains of E.coli possesses restriction enzymes, hence they degrade foreign DNA. To escape degradation the exponentially growing cells are pretreated with calcium chloride at low temperature.  The vector DNA enters the bacterial cells.

After the insertion of recombinant DNA into the host cell, the next step is selection or identification of the recombinants. The methods used to do so consider expression on non-expression of certain characters especially antibiotic resistance gene (e.g., ampicillin  resistance gene) on plasmid vector. Selectable marker usually provides resistance against substrate which when added to the culture medium inhibits the growth of normal cells or tissues in culture, consequently only transformed tissues will grow.

The simplest method for identification is to grow transformed host cells (with ampicillin resistance gene) on medium containing ampicillin. This would enable the cells containing this transformed plasmid to grow and form colonies. There are other methods for detection of recombinants based on the fact that the cloned DNA fragment disturb the coding sequence of gene. This is termed as insertional inactivation.

In this method the inactivation a marker gene of the vector by addition of the foreign DNA is helpful in distinguishing the recombinants from the non recombinants.

Another but similar example that involves insertional inactivation is that of lac z gene E. coli. It is also termed as blue white selection. This is the quickest method of screening for selection which relys on the action of a gene product (i.e., enzyme) on a chromogenic substance (on hydrolysis produces blue colour product) to distinguish between the recombinants and the non recombinants.

This method can be well explained with the help of pUC vector. This vector contains a marker gene termed as lac z marker gene which encodes for an enzyme termed as beta-galactosidase. The enzyme acts on a colourless substance X-gal and hydrolyzes it into blue colour product. Addition of foreign DNA  into the lac z gene leads to its inactivation. Thus it results in the formation of a recombinant vector. 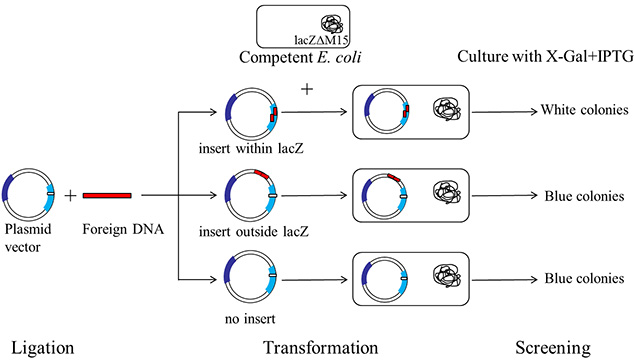 It is an important method of screening the recombinant phages.  Bacteriophage lambda contains a CI gene which encodes a CI protein (a repressor protein). This CI repressor protein is responsible for establishing lysogenic life cycle in the host E. coli cells.

The phages with CI gene produce turbid plaque ( plaque in which some bacterial cells are active due to the establishment of lysogeny). When a recombinant phage infects the E.coli cells, only clear plaques form.