Genetic code is the relationship between the sequence of amino acids in a polypeptide and nucleotide sequence of DNA or mRNA .

DNA or RNA carries all the genetic information. It is expressed in the form of proteins. Proteins are made of 20 different types of essential amino acids. The information about the number and sequence of these amino acids forming protein is present in DNA.  It is then passed on to mRNA during transcription.

The discovery that a codon i.e., hereditary unit of a gene containing coded information for one amino acid consists of three nucleotides (triplet). This was helpful in solving the above problem. Thus, for 20 amino acids 64, possible permutations are available. This important discovery was the result of experiments by Marshall W. Nirenberg and J. Heinrich and later by H.G. Khorana.

Following are the different researches which were helpful in deciphering the triplet genetic code:

Properties of the genetic code:

Three adjacent nitrogen bases constitute a codon which specifies the placement of one amino acid in a polypeptide.

The three termination codons- UAA (ochre), UAA (amber) and UGA (opal) signals the termination of polypeptide chain. They do not specify any amino acid and are hence also termed as nonsense codons.

The genetic code is applicable universally i.e., a codon specifies the same amino acid from a virus to a tree or human being. Thus, mRNA from chick oviduct introduced in Escherichia coli produces ovalbumen in the bacterium exactly similar to one formed in a chick.

One codon specifies only one amino acid and not any other.

A nitrogen base is a constituent of only one codon.

Since there are 64 triplet codons and only 20 amino acids, the incorporation of some amino acids must be influenced by more than one codon. Only tryptophan (UGG) and methionine (AUG) are specified by single codons. All other amino are specified by 2-6 codons. The latter are termed as degenerate codons. In degenerate codons the first two nitrogen bases are similar while the third one is different. As the third nitrogen base has no effect on coding, the same is termed as wobble position.

Portion of DNA termed as cistron specifies the formation of a particular polypeptide. It means that the genetic system should have as many cistrons as the types of polypeptides occurring in the organism. 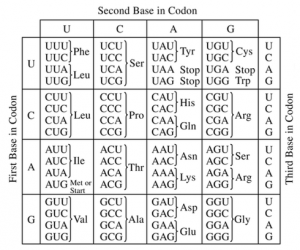