Genetic disorder is an illness caused by abnormalities in genes or chromosomes, especially a condition that is present since birth. Most genetic disorders are quite rare and affect one person in every several thousands or millions.

A genetic disorder may or may not be a heritable disorder. Some genetic disorders transfer from the parents’ genes, but others are always caused by new mutations or changes in the DNA.

Following are some of the Mendelian disorders in human:

A recessive mutant gene causes thalassemia. This is an autosome linked blood disease. The parents transmit this disease to the offspring. The parents are the carriers of the disease (heterozygous) and remain unaffected. In thalassemia, hemoglobin is not synthesized due to either mutation or deletion causing reduced rate of synthesis of one of the globin chains (i.e., alpha and beta chains). Depending on the chains thalassaemia is of two types i.e, alpha and beta.

Hbs allele shows many phenotypic effects. The primary effect of Hbs gene is the production of an abnormal molecule of haemoglobin. Homozygous persons have severe disease of sickle cell anaemia with retarded physical development, an unusual elongation of arms and legs and they die before the age of maturity.

Heterozygous persons (sickle cell trait) serve as carriers and usually do not suffer from anaemia. They contain only 25 to 40% haemoglobin s which does not permit sickling except under extra ordinary low concentration of oxygen.

Heterozygous persons have more resistance to malaria than normal probably because sickle shaped red blood cells do not carry as much space and oxygen as the normal ones and may not supply sufficient oxygen and space for maximum growth of the parasite. Inheritance of sickle cell anaemia follows Mendelian inheritance. Accordingly, heterozygous parents produce children in 1:2 ratio. 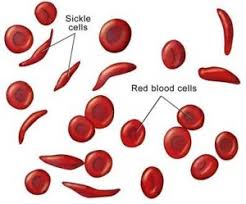 This is an autosomal recessive disorder. The gene is responsible for the production of phenylalanine hydroxylase (PAH).

A test by Dr.Willard Centrewall  is helpful in detecting the PKU problem in infants . The process involves application of 10% solution of ferric chloride to the wet diaper of the baby . In normal babies yellow spot appears while in PKU children, this spot will be green in colour. One in about 18,000 people inherits PKU.

The PKU patients besides suffering from mental retardness may also show other phenotypic effects such as skin eczema, abnormalities of teeth enamel and bones. Severe restriction in the diet helps a lot in the treatment of the disease. Avoiding foods high in proteins such as meat and egg and consumption of fruits and vegetables in large quantities is also helpful.