The Season of Hilsa Fish and a Challenge to Gopal

It was a season for Hilsa fish and it was Hilsa that everyone was talking about. In the market fishmongers were selling only Hilsa fish luring customers to buy it. Even in the royal court, courtiers were talking about Hilsa.

This made the king lose his temper. He believed that no one could stop the people from talking about Hilsa fish not even Gopal who was the wisest man in his court. The king challenged Gopal to buy a huge Hilsa fish and bring it to the palace without anyone asking him about it. Gopal accepted the challenge.

Handing for the Challenge

After a few days, Gopal shaved beard from half of his face and smeared ash on himself. He wore rags and looked disgraceful. His wife was shocked and asked him not to leave home like this, but Gopal kept on telling her that he was going to buy a huge Hilsa fish. She thought Gopal had gone mad. At the market Gopal bought a huge Hilsa fish and started walking towards the palace. No one noticed the fish, but everyone was looking at Gopal walking strangely with his shabby cloths. People called him mystic and mad.

He went to meet the king but was stopped by the guards. He started dancing and singing loudly in front of the royal palace. The king questioned Gopal about the reason for his weird attire. Gopal reminded the king about the challenge and told him that from the market to the royal palace, no one had asked him a single word about the Hilsa fish. The king burst into laughter and accepted that Gopal had done the impossible once more.

Working with the Text

Ans. Everyone around the king was talking about Hilsa fish. This had infuriated the king so he didn’t want anyone to talk about the Hilsa fish.

Ans. The king asked Gopal to buy a huge Hilsa fish from the market and to ensure that no one should talk to him about the fish on the entire way from the market to the palace.

Ans. Gopal half-shaved his face. Smeared ash on his body himself and wore rugs before going out to buy Hilsa fish.

Ans. Gopal started singing and dancing in front of the palace at a loud voice. The king heard the noise and asked the man to be brought inside.

Ans. No one was interested about the Hilsa fish Gopal had bought because of Gopal’s condition. He was wearing rugs, his face was half-shaven and ash was smeared over his body. People were more interested in his appearance than the fish.

(iv) Gopal was too poor to afford decent clothes. ……….

Change the following sentences in the story to reported speech. The first one has been done for you.

(i) How much did you pay for that Hilsa?

Ans. The woman asked the man how much did he pay for that Hilsa.

Ans. Gopal’s wife asked him why his face was half-shaven.

Ans. Gopal told the king that he accepted the challenge.

Ans. Gopal told the guards that he wanted to see the king.

Ans. The king ordered the guard to bring the man to him at once.

Challenge A call to take part in a contest or competition.

Vikram accepted the challenge of his teacher and won prize in the annual day celebrations.

Mr Bean is one of the most famous comical characters on television.

Courtier A person, who attends a royal court as a companion or advisor to the king or queen.

Birbal was one of the most important courtiers in Akbar’s court.

Smearing Coat or mark carelessly with grease or oil.

Before the game, Rakesh smeared his body with oil. 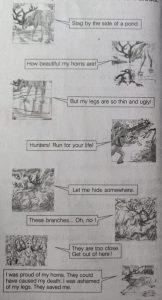 (i) Now ask your partner questions about each picture.

(e) Why is the stag running?

(f) Is he able to hide in the bushes?

(g) Where are the hunters now?

(h) Are they closing in on the stag?

(j) What does the stag say about his horns and his legs?

(a) The stag is standing by the side of a pond.

(b) The stag is about to drink water when he saw his reflection in the pond.

(c) Yes, he finds them beautiful.

(d) No, the stag finds his legs to be thin and ugly.

(e) The stag is running because he has been chased by the hunters.

(f) No, he is not able to hide in the bushes because his horns got stuck in them.

(g) The hunters are just behind the stag.

(h) Yes, they are closing in on the stag.

(i) The stag was able to run fast because of his legs and is free now.

(j) The stag says that he was proud of his horns, but he would have been killed because of them. He was ashamed of his legs, but they saved his life.

(ii) Now write the story in your own words. Give it a title.

Ans. There was a stag, he lived in a jungle. One day he went to drink water in a pond. He saw his reflection in the pond. He felt proud of his beautiful antlers. Then he saw his legs, he was upset because they were thin and ugly. Suddenly, there were hunters behind him. The stag ran to save his life. He wanted to hide in the bushes, but couldn’t as his antlers were stuck in them. He found the hunters just behind him. He ran for his life and was finally saved.

At the end he realised that he was feeling proud of his antlers, but he would have been killed because of them. He felt ashamed of his legs, but was able to save his life ultimately because of them. The title is ‘The Stag and his Beautiful Horns’.

As soon as he caught ………………. of the teacher, Mohan started writing.

My youngest sister is now a …… old.

How did the fishmongers lure the customers to buy Hilsa?

Ans. The fishmongers lured the customers by saying that the price had been down that day.

Ans. Gopal was a courtier in the king’s court known for his wisdom and presence of mind.

What did Gopal’s wife think about him?

Ans. Gopal’s wife thought that her husband had gone mad.

What were the remarks of two men on seeing Gopal in the market?

Ans. On seeing Gopal a man said that he must be a madman while the other called him a mystic.

What was the king’s reaction when he came to know that he had lost the challenge?

Ans. The king was happy about it and congratulated Gopal for winning the challenge.

What happened when the king hear his courtiers talking about Hilsa fish?

Ans. When the king heard his courtiers talking about Hilsa fish, he lost his temper and warned them that they were courtiers and not fishermen. But the king soon felt guilty, looking at his nervous and humble courtier when he had rebuked. His tone changed and he said that it was the season of Hilsa and nobody could be stopped from talking about it.

Why did Gopal’s wife find his activities strange?

Ans. Gopal had half-shaven his face. Smeared ash over himself. Had put on rags and was looking disgraceful. She asked Gopal the reason for such weird acts. She stopped him from going out like that but Gopal told her that he was going to buy Hilsa fish. At last she concluded that Gopal had gone mad.

Who was Gopal? What was the challenge given to him by the king? How he won it?

Ans. Gopal was one of the wise men in the king’s court. When the king was fed up with ongoing talks about Hilsa fish he challenged Gopal.

Gopal happily accepted the challenge of buying a huge Hilsa fish from the market and to ensure on the way from the market to the palace no one should talk to him about the fish. He was an intelligent man. He dressed up like a mad man and his appearance caught everyone’s attention. He reached the court without anyone talking about the fish as everyone was drawn towards his appearance.

Why was Gopal barred entry to the palace? How did Gopal manage to get in? What was the king’s reaction to Gopal’s deed?

Ans. Gopal looked suspicious or rather mystic since he had dressed himself filthly. Moreover his beared was half-shaved and ash was smeared on it. Therefore the guards barred his entry to the palace. He started dancing and singing loudly so that the king might hear him and call him inside. The king ordered him to be taken inside but he could not recognise him.

When Gopal reminded him of his challenge and proved that he had fulfilled it the king was surprised and burst into laughter.

We should not give up in any situation. If we try hard we can definitely find a solution. Why do you think so?

Ans. Yes, we should not give up in any situation. We should find out a solution to come out of it. Sometimes, it might be tough to find the solution, but if we try hard, nothing is impossible. We learn from the efforts we make in life. If we won’t make efforts then our learning will stop.

It is OK to commit mistake but we should learn our lesson from them and must not repeat them again. The world remember the great people because they did things differently and took up those risks in life.

Directions (Q. Nos. 1-6) Read the extract given below and answer the following questions.

Listen to me! Please, you can’t possibly go out in those disgraceful rags! What are you upto? How

many times I must tell you, woman? I am out to buy a huge Hilsa fish.

Ans. Gopal’s wife is speaking in these lines.

Who is going to buy Hilsa fish?

Ans. Gopal dressed up like that to catch everyone’s attention so that people will talk about him and not about the Hilsa fish.

What does the woman think about the man finally?

(a) He is an intelligent man

(c) She doesn’t think anything

(d) None of the above

Why does the man want to buy Hilsa fish?

(a) To win the challenge

(b) Because everyone was talking about the fish

(c) Price of the Hilsa fish has gone down

(d) Because to please his wife

Ans. (a) To win the challenge

Find out one word from the above lines that means ‘shameful.

(d) None of these

Directions (Q. Nos. 1-6) Read the extract given below and answer the following questions.

Are you a courtier or a fisherman? I am sorry I lost my temper, it’s the season for Hilsa fish and no one …………………

Who is the speaker of the above lines?

Ans. The king is the speaker of the above lines.

Why is he feeling sorry?

Ans. He is feeling sorry for being rude to his courtier.

What is the speaker asking to be stopped?

Ans. He wants the talks about the Hilsa fish to be stopped for a while as everyone wanted to speak about ‘Hilsa fish’ only.

What did the speaker want?

(a) To eat Hilsa fish

(c) The season for the Hilsa fish to go

(d) He himself was not clear ert 2ew ted

Ans. (b) Someone to stop the talks about Hilsa fish for a while.

What made the speaker upset?

(a) A fisherman entered his court.

(b) Gopal was not present in the court.

(c) Everyone including the courtiers were talking about Hilsa fish.

Ans. (c) Everyone including the countiers were talking about Hilsa fish.

Find a word from the above lines is synonym of ‘anger’.