The process of exudation of liquid droplets from the margin and apex of the leaves of herbaceous plants is termed as guttation.   It was first studied by Bergerstein in 1887.  All plants do not show guttation. Some common plants which show guttation are wheat, barley, rye, mustard, tomato, nasturtium etc.  Guttation takes place through special structures called, hydathodes.

Hydathodes are present on the margins and tips of the leaves.  Each hydathode consists of a group of loosely arranged achlorophyllous or colourless parenchymatous cells called epithem.  The epithem cells are also known as transfer cells. These cells are specialized cells which help in absorbing inorganic and organic solute present in the exudate.

The epithem cells are present above the vascular strand.  The epithem cells connect to the outside through a permanent pore in the epidermis, termed as water pore or water stoma.  The development of a positive pressure in the xylem present in the vein ending causes exudation of liquids from the water pore or stoma.  The pressure forces the liquid out through the hydathode. 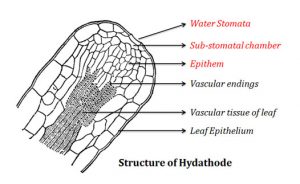 Guttation generally occurs when transpiration is less and the rate of water absorption is high.  Under these conditions, root pressure is maximum which forces water upwards to xylem elements and eventually exudes in the form of drops from the hydathode in the leaf margins.  Guttation may also occur during daytime if the plants are growing in moist or humid condition which increases root pressure.

An incrustation of salts is formed on the surface of the leaves after the guttation liquid evaporates.  Guttation fluid is a dilute solution of both inorganic and organic substances.  Poorly aerated soils, heavily salted or mineral deficient soil, dry soils and the atmospheric conditions promoting transpiration inhibit guttation.

Guttation drops can easily be mistaken for dew drops because both occur in the morning.  However, dew generally does not fall on cloudy nights.  Guttation drops is seen on tips or margins of the leaves while dew drops are present all over the plant and even the soil.

A well watered potted plant of nasturtium is taken. The pot is covered by a polythene to check evaporation of water from the soil.  It is kept under a bell jar over a flat surface or a glass slab. The edges of bell jar is sealed by vaseline. 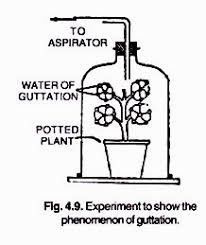 Difference between Stomata and hydathode

Difference between transpiration and guttation

It is the exudation of sap or watery solution from the cut or injured parts of the plant,e.g., Agave, Acer, Vitis, Toddy palm.  It occurs due to root pressure, phloem pressure, local pressure in xylem (stem pressure) and latex or resin.