Question 1 : If a trait A exists in 10% of a population of an asexually reproducing species and a trait B exists in 60% of the same population, which trait is likely to have arisen earlier?

Answer : Trait B. Because it exists in large % in the population?

Question 2 : How does the creation of variations in a species promote survival?

Answer : Creation of variations in a species promotes the survival of the individual species because it adjusts better than the non-variants in the changed environment.

Question 1 : How do Mendel’s experiments show that traits may be dominant or recessive?

Answer : When pea plants (parents) of a particular trait having contrasting character are crossed with each other produce F1 progeny that express dominant trait. When the progeny are self-crossed then the traits are separate in F2 progeny and the recessive traits is also expressed.

Question 2 : How do Mendel’s experiments show that traits are inherited independently?

Answer : When plants with two contrasting traits are crossed, the dominant traits express themselves in F1 generation. When the progeny or F1 are self-crossed, traits separate in F2 generation in 9 : 3 : 3 : 1 ratio. It suggests that the traits are inherited independently.

Answer : Though the blood O is dominant, but the information regarding blood group is not given.

Question 4 : How is the sex of the child determined in human beings?

Answer : The sex of the child in human beings is determined genetically by presence/absence of Y sex-chromosome.

Question 1 : What are the different ways in which individuals with a particular trait may increase in a population?

Answer : The individuals may increase in a population due to – Natural selection.

Question 2 : Why are traits acquired during the lifetime of an individual not inherited?

Answer : The acquired traits are physically only. They do not change the trait at genetic/DNA level. Hence, they are not inherited.

Question 3 : Why are the small numbers of surviving tigers a cause of worry from the point of view of genetics?

Answer : The small numbers of surviving tigers is a cause of worry because once the tigers are lost the genes also will be lost.

Question 1 : What factors could lead to the rise of a new species?

Answer : Factors such as :

Question 2 : Will geographical isolation be a major factor in the speciation of a self-pollinating plant species? Why or why not?

Answer : No. Because the self-pollinating plants have the pollens to be transferred to the stigma of same flower, so geographical isolation will not make any difference.

Question 3 : Will geographical isolation be a major factor in the speciation of an organism that reproduces asexually? Why or why not?

Answer : No. Because the asexually reproducing organisms need only one individual for reproduction, so geographical isolation will not make any difference/

Question 1 : Give an example of characteristics being used to determine how close two species are in evolutionary terms.

Answer : No. These are analogous organs. These have different structural plan. They are only used for flying.

Question 3 : What are fossils? What do they tell us about the process of evolution?

Answer : Fossils are impressions on rocks of dead organisms that got buried in earth millions of years ago. They give us information about the type of organisms that existed at that time and provide evolutionary relationship with present-day animals.

Question 1 : Why are human beings who look so different from each other in terms in size, colour and looks said to belong to the same species?

Answer : Because of study of their evolutionary relationships are same and have a common ancestor Homo sapiens.

Question 2 : In evolutionary terms, we can say which among bacteria, spiders, fish and chimpanzees have a ‘better’ body design?

Answer : Bacteria. Because they can resist extreme conditions and have shown no major changes in their ‘body design’ since origin.

Question 2 : An example of homologous organs is

Question 3 : In evolutionary terms, we have more in common with

Answer : Dominant as both parents are having light eye colour.

Question 5 : How are the areas of the study – evolution and classification interlinked?

Answer : Evolution shows the relationships among the different species having a common ancestor. Classification is grouping the individuals/populations on basis of certain common characteristics that closely related individuals/species show. Both are interlinked to study each other.

Question 6 : Explain the terms analogous and homologous organs with examples.

For example : Inheritance pattern of limbs in amphibians (frog), reptiles (lizard) , birds (sparrow) and mammal (human) is same. The limbs in above organisms perform different functions.

For example : Wings of birds (sparrow), bat (a mammal) , insects (cockroach), etc., have the same use flying, but are structurally different. Wings of birds have feathers, wing of bat is a skin fold between the fingers, wings of insects are membranous without bones.

Question 7 : Outline a project which aims to find the dominant coat colour in dogs. 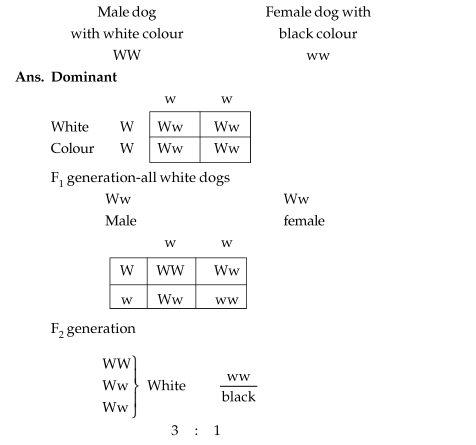 Question 8 : Explain the importance of fossils in deciding evolutionary relationships.

Question 9 : What evidence do we have for the origin of life from inanimate matter?

Answer : A sexually reproducing organisms involved only single individual. They reproduce by simply copying the DNA material – the blue print for body design and transfer it to next generation. The DNA copying error is slow and occurs less. Hence, less variations from original.

Sexually reproducing organisms involve two individuals of opposite sexes that have already accumulation of variations from previous reproductive processes. The sexual reproduction increases the variation chances to almost double or more is viable . The evolution of organisms is better as it has many variants/variations in progeny.

Question 11 : How is the equal genetic contribution of male and female parents ensured in the progeny?

Question 12 : Only variations that confer an advantage to an individual organisms will survive in a population. Do you agree with this statement? Why or why not?

Answer : Yes. Because those individuals that do not show/have variations will die due to environmental factors such as natural selecting as in case of red and green beetles where the crow is predator.