Gregor Johann Mendel is the “Father of Genetics”. Children often resemble their parents. They acquire some of the characters from mother and some others from their father.  This is due to transmission of “factors” from the parents to children. These factors now termed as genes occur on the chromosomes.

Selection of pea plant : Mendel had following advantages in his choice of Pisum sativum.

1.There were several varieties of pea which showed distinct alternative traits.

2.The plants where easy to cultivate. The short life span was also useful in getting quick results.

3.The flowers self pollinate and the petals completely enclose the reproductive structures . This was helpful to maintain varieties with same characters generation after generation.

4.The varieties could be artificially cross pollinated.

Hybridization is the crossing of two different individuals to produce an offspring or hybrid. Mendel cultivated all the varieties of plant until he was sure that each variety was true breeding or homozygous for a character. Homozygosity was tested by growing seeds, for example, plants with white flower.

He removed anthers from many plants before cross pollination. Emasculated varieties of plants were termed as female parents. The stigmas of the female plants were dusted with pollen grains from the anthers of another plant, now termed as male parent.

The artificially cross pollinated flowers of female parent were then covered with small bags (i.e., bagging) to prevent  pollens from other plants reaching their stigmas.

Such a cross where two alternative forms of a single character are used was termed as ‘monohybrid cross’. The hybrid or offspring produced as a result of this cross forms first filial or F1 generation.

The last stage of his experiment consisted of producing second filial generation or F2 generation. This was done by enclosing flowers of F1 hybrid in bags so that self pollination occurs naturally. The seeds from such F1 plants were grown into F2 hybrids.

Based on his observation Mendel proposed the following principles or laws of inheritance.

Inheritance of one gene

In monohybrid cross, there is inheritance of only a pair of genes .

Crossing between true homozygous or true breeding varieties ( i.e., parents) results in F1 generation. For, example tall (TT) variety and dwarf (tt) variety.  The F1 hybrid plants were all tall. This characteristic was termed dominant. According to Mendel the dwarf characteristic though present in F1 hybrid, fails to express itself in the presence of dominant allele. Mendel termed the unexpressive allele as recessive.

An allele which expresses itself externally when present in homozygous or heterozygous conditions.

In F1 or heterozygous organism, both unlike alleles, i.e.,tall (T) and dwarf (t) occur together, but only the tall character is expresses itself . Hence, tall is a dominant allele & dwarf is the recessive alleles in the example. 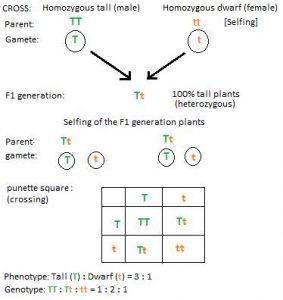 Mendel’s law of segregation states that an individual organism has two alleles for every gene, one inherited from its mother and one from its father. So, when this organism forms its own gametes, each gamete will receive only one of these alleles, and this process is random.

The 2 alleles for each character segregate (i.e., separate) during gamete formation. 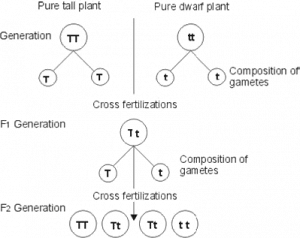 Mendel, after working with one pair of allele, worked with two different characters using two pairs of alleles (also known as dihybrid cross).

The results thus show that individual alleles still segregate in the same 3:1 ratio obtained from monohybrid cross. This proves that though segregation of 2 pairs of alleles is considered together, each pair segregates independent of the other. This results in new combinations. 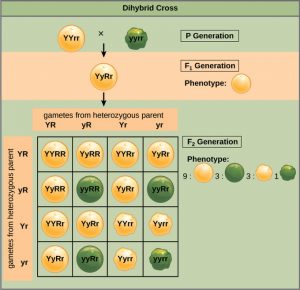 It involves cross between F1 hybrid with any one of the two parents i.e., homozygous dominant or homozygous recessive. Thus there would be 2 following possibilities:

So, both the crosses are termed as back cross.