A genome is the complete collection of an organism’s genetic material. Mapping of human genome actually began in 1911, when the gene responsible for red green colour blindness was assigned to the X chromosome. The other 22 pairs of chromosomes remained virtually unchartered until the late 1960’s. By the use of hybridoma technique, scientists assigned about hundred genes to specific chromosomes.

The development of recombinant DNA technology led to new mapping strategies, including the use of DNA variations as markers on the human genome. Meanwhile, scientists learned to sequence the genes they isolated. This became possible in the mid 1970’s, when Frederick Sanger at Cambridge University and Walter Gilbert and Allan Maxam at Harvard University developed efficient new methods for determining the order of the four bases A,T,G and C in a strand of DNA.

1.Determining the order or sequence, of all the bases in our genome’s DNA.

2.Making maps that show the locations of genes for major sections of all our chromosomes.

3.Producing linkage maps, complex versions of the type originated in early Drosophila research, through which inherited traits (such as those for genetic diseases) can be tracked over generations. 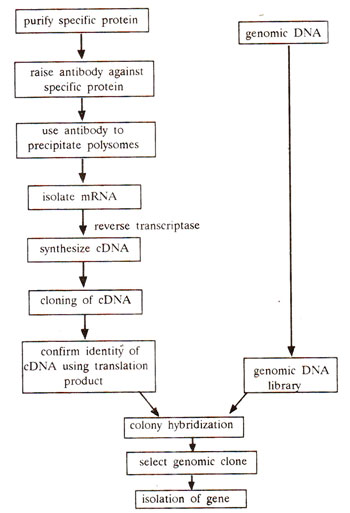 Fig: Human Genome (Isolation of a gene for a specific protein)

Following are some of the salient observations of the Human Genome:

2.On an average, there are only about 3000 bases in each gene, though the number differs considerably with genes. The largest known human gene is dystrophin with 2.4 million bases.

3.The total number of genes estimated is 30,000 though initial estimate varied between 80,000 to 1,40,000 genes. Almost all nucleotide bases are exactly the same in all people.

4.The functions are unknown for over 50% of discovered genes.

5.Less than 2% of the genome codes for proteins.

7.Repetitive sequences are stretches of DNA sequences that repeat many times, sometimes hundred to thousand times. They  have no direct coding functions, but they shed light on chromosome structure, dynamics and evolution.

9.Scientists have identified about 1.4 million locations where single base DNA differences (SNPs-single nucleotide polymorphism) occur in humans. This information promises to revolutionise the process of finding chromosomal locations for disease-associated sequences and tracing human history.

Following are some of the applications:

Genome data is anticipated to provide the detailed knowledge of new avenues for advances in medicine and biotechnology. For example, a number of companies started offering easy ways to administer genetic tests that can show predisposition to a variety of illness, including breast cancer, hemostasis disorders, cystic fibrosis, liver diseases and many others.

Also the etiologies  for cancers, Alzheimer’s disease and other areas of clinical interest are  likely to gain benefit from genome information and in future may possibly lead to significant advances in their management.

Investigating the the gene causing disease

By visiting the human genome database on the World Wide Web, one can examine what other scientists have written about gene under investigation, including the three dimensional structure of its product, its function, it’s evolutionary relationship to other human genes or to genes in mice, yeast or fruit flies, possible detrimental mutations, interactions with other genes, body tissues in which this gene is activated and the diseases associated with this gene or other data types.

Deeper understanding of the disease processes at the molecular level may determine new therapeutic procedures.

The analysis of similarities between DNA sequences from different organisms is also opening new avenues in the study of evolution. The data from this project may illuminate many questions about the similarities and differences between humans and our closest relatives (i.e., the primates and indeed the other mammals).

The Human Genome Diversity Project (HGDP), aims at mapping the DNA that varies between human ethnic groups. In future, HGDP could possibly expose new data in disease surveillance, human development and anthropology. HGDP could unlock secrets behind and create new strategies for managing the vulnerability of ethnic groups to certain diseases. It could also show how human populations have adapted to these vulnerabilities.

Following are the advantages of human genome project:

Following are the techniques

6.Electrophoresis and other tools and techniques

Genomes of Some Organisms

In 1990, sequencing of Cytomegalo virus (a herpes virus) was determined. It contains quarter billion base pairs. Bacterium Haemophilus influenzae has 1,830,173 base pairs and 1743 genes.