It is a form of intermediate inheritance in which one allele for a specific trait is not completely expressed over its paired allele.  Incomplete dominance is a deviation from Mendel’s law of segregation or monohybrid ratio.

Generally, there are two phenotypic expressions of a particular character. For example, flower colour in four o’clock plant (Mirabilis jalapa) has two phenotypic expressions- red (dominant) and white (recessive). Only one of these is expressed-i.e., dominant phenotype in homozygous (AA) and heterozygous (Aa) conditions and recessive phenotype in only homozygous (aa) condition. However, in this case F1 (heterozygous) shows pink flowers which is intermediate between the dominant (red colour of flower) and the recessive (white colour of flower). This type of inheritance where heterozygote shows an intermediate phenotype, is termed as incomplete dominance. Further, in F2 generation both phenotypic and genotypic ratios are also similar, i.e.,1 red (RR): 2 pink (Rr): 1 white (rr). 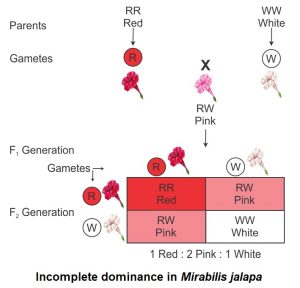 Another expression to Mendel’s result is the phenomenon of co-dominance. In this case alleles express themselves independently even when present together. In heterozygous condition both alleles would be present and each would express independent of the other. While considering co-dominance different symbols are used. Capital letters are used for both the alleles with different subscripts for example, IA, IB, or HbA HbS or M and N (for MN blood system). Following are some of the examples:

In the presence of two recessive alleles for sickle cell haemoglobin (HbS HbS), the shape of red blood cells is abnormal. This is due to synthesis of haemoglobin molecules with wrong amino acid sequence. These abnormal molecules tend to attach to one another in long, rod- like chains when oxygen is in short supply i.e., during exercise, pneumonia, emphysema, etc. These rod-like chains distort the shape of red blood cells into sickle shape. It causes blocking of small blood vessels.  It is often lethal in homozygous recessive condition. 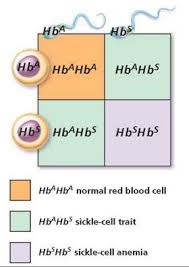 The ABO blood group system in humans is an example of multiple allelism. At this locus, there are two copies of gene I. The locus is polymorphic i.e., there are several alleles competing for this position. Specifically, there are three alleles IA, IB and IO.

These alleles determine the final structure of the type of protein that coats red blood cells. Besides being an example of multiple allele system, this example is a combination of dominance and co-dominance at the same time. The IOallele produces a ‘bogus’ gene product that leaves the red blood cell with an incomplete coat (i.e., it lacks a coat). Homozygous individuals with this allele IO IO possess red blood cells with this particular protein.

An individual that has IO allele will not produce coating protein, but pairing with either IA or IB as the other allele, produces a coating of protein A or protein B on the red blood cells.  Thus allele IO is recessive to both the alleles IA or IB.