In this type of inflorescence, the main axis continues to grow and develop lateral branches which bear flowers.  The flowers are borne in acropetal succession.  Flowers may be either pedicellate or sessile.

Depending on the arrangement of the pedicellate or sessile flowers, racemose inflorescence may be broadly classified into the following types:

In some cases, however, the main axis instead of bearing flowers directly on it, gives rise to lateral axis which in turn bear the pedicellate flowers.  Such an inflorescence is said to be a compound raceme or panicle.  Panicles are found in case of Raphanus, Delonix etc.

Corymb:  In this case, the pedicels of the lower flowers are longer than the upper ones so that all the flowers come to lie almost at the same level as in candytuft, Lantana camara etc.

Umbel:  Here, the main axis is shortened and the flowers develop in the group from the same level of the axis, so that they appear to have spreaded from a common point.

The pedicels of all the flowers are more or less of the same length.  A whorl of bract is always associated with the umbel and each flower is developed from the axil of the bract.  These bracts together form an involucre at the bases of the flowers.  Such an umbel is commonly referred as simple umbel, example, wild coriander etc.

More commonly, lateral branches are developed from the main axis of the umbel and each branch bears the flowers arranged in the form of an umbel.  Such an umbel is called compound umbel, example, coriander, cumin etc.

Spike:  In this case, the main axis is elongated and the flowers are borne in acropetal succession, example, Achyranthes, Adhatoda etc.

Spikelet:  This is a reduced type of spike and is very small. Each spikelet comprises of one or few flowers called the florets.  The main axis develops small branches bearing the sessile flowers.

Each spikelet has two small empty glumes at its base and just above them, a flowering glume, called the lemma.  At the axil of the lemma, a flower is developed.  Opposite to the lemma, there is a small bracteole, called the palea. Thus the flower is enclosed by lemma and palea, example, rice, wheat etc.

The whole inflorescence is covered with a large fleshy bract known as spathe, which attracts the insect, example, colocasia, musa etc.  When the fleshy axis becomes branched and each branch bears a spadix being covered by a bract it is called a compound spadix as in date palm, coconut etc.

Catkin:  This is a drooping spike, which bears unisexual sessile flowers.  The main axis is elongated and becomes pendulous, example, mulberry etc.

Capitulum or head:  Here, the main axis of the inflorescence is flattened and a number of small sessile flowers are developed on it.  At the basal region of these florets, one or more walls of bracts are developed and form an involucre.  The outer florets in the head are older than the inner ones.

They are strap shaped and when unisexual are called ray-florets.  The central florets are tubular, mostly bisexual and are called disc-florets.  Examples, Tridax, marigold, sunflower etc.

Each of these branches also terminates with a flower, and from the base of these terminal flowers, lateral branches may develop in the same manner.  Thus, in a cymose inflorescence, the terminal flower is older and opens earlier than the lateral ones.

In cymose inflorescence, usually one lateral branch or two lateral branches may develop at a time from the main axis and also from the successive axis.  Accordingly, they are called monochasial cyme or dichasial cyme.

In some cases, however, more than two lateral branches may develop from the base of the terminal flowers, and in that case, the inflorescence is called polychasial cyme.

Monochasial or uniparous cyme:  When the main axis terminates in a flower and then give rise to a single lateral branch ending in a flower, the inflorescence is said to be a monochasial cyme.  It is of two types – helicoid and scorpioid.

Scorpioid cyme:  When the lateral branches are developed on the alternate sides in a zigzag manner, the monochasial cyme is said to be a scorpioid cyme as in Gossypium etc.

Dichasial cyme or biparous cyme:  In a cymose inflorescence, when two lateral branches are developed from the main axis just below the terminal flower, and each of them terminates in a flower the inflorescence is called inflorescence dichasial or true cyme.

In this case, the succeeding lateral branches also follow the same pattern or branching, example, Ixora or jasmine etc.

Verticillaster:  This is a condensed form of cymose inflorescence.  A cluster of sessile flowers are developed in the axil of leaves having opposite phyllotaxy.  It appears as if the flowers have formed a false whorl at the node.

In this case, the main axis terminates in a flower and gives rise to two condensed lateral branches, each bearing a terminal flower.  The succeeding branches are also very much condensed and are developed on alternate sides, each terminating in a flower,example, Ocimum, mint, etc.

Hypanthodium:  In this case, the peduncle is fleshy, flattened and widened out to form a hollow cup, leaving a narrow opening at the top and the flowers are borne on the inner wall of the cup or receptacle.

The opening is covered with small scales which are projected downwards.  The male flowers are developed towards the apex and female flowers at the base of the receptacle, example, Ficus etc. 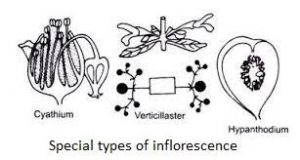 Cyathium:  In this case, the entire inflorescence looks like a single flower.  Here, the main axis forms a convex receptacle.  A single female flower develops at the centre of the receptacle and it is surrounded by a whorl of male flowers arranged in a scorpioid manner.

Each male flower is represented only by a stamen which is articulated to a short peduncle or stalk.  The flowers develop in the axils of hairy bracteoles and are enclosed within an involucre of bracts which forms a cup-like structure.  Example Euphorbia pulcherrima etc.