Hans Krebs discovered the cycle.  The cycle is also termed as citric acid cycle or tricarboxylic acid (TCA) cycle after the initial products.  The pyruvic acid formed during glycolysis enters mitochondria where it is further oxidised.

1.Formation of Acetyl coenzyme A.

Formation of Acetyl Coenzyme A:

Pyruvic acid molecules that are produced during glycolysis move into mitochondria. All the reactions of cellular respiration take place within these tiny power houses.  Here each three carbon molecule of pyruvic acid is decarboxylated and dehydrogenated.  Due to release of carbon dioxide, 3 carbon molecule of pyruvic acid thus converts into a 2 carbon acetyl group. This 2 carbon acetyl group thus reacts with a large complex enzyme, termed as coenzyme A.  As a result, a compound termed as, Acetyl coenzyme A (CoA) is formed.  Thus the process requires five cofactors namely, magnesium (mg++) thiamine pyrophosphate (TPP), NAD, coenzyme A and lipoic acid.  Following is the overall reaction of conversion of pyruvic acid into Acetyl coenzyme A :

The reactions of these cycles were worked out by Sir. Hans Krebs, hence, the name Krebs cycle.  Following are the important steps of Krebs cycle:

Oxaloacetic acid accepts acetyl group of the acetyl coenzyme A and thus forms citric acid in the presence of enzyme, citrate synthetase.

Cis-aconitic acid thus converts to iso-citric acid by utilizing water in the presence of enzyme, aconitase.

Iso-citric acid on oxidation gives rise to another 6 carbon compound oxalosuccinic acid. The reaction also requires an enzyme, iso-citrate dehydrogenase.  The two hydrogen atoms that are removed in this process are then accepted by NAD.

This step involves decarboxylation of oxalosuccinic acid.  As a result, it leads to the formation of a 5 carbon compound, α-ketoglutaric acid .  The reaction takes place with the help of an enzyme, i.e., decarboxylase.

In this step oxidative decarboxylation of α -ketoglutaric acid occurs.  As a result, it leads to the formation of a 4 carbon compound i.e., succinyl CoA.  This reaction also requires an enzyme, α-ketoglutarate dehydrogenase.  Thus in this step, one molecule of NAD reduces to NADH2 and one molecule of CO2 is released.

Formation of succinic acid and ATP/GTP:

In this step, coenzyme A splits off from succinyl CoA.  As a result it leads to the formation of  succinic acid in the presence of enzyme, succinyl thiokinase.  In this process, one molecule of GTP is formed, which later gives one molecule of ATP.  This reaction is also referred to as substrate phosphorylation.

Oxidation of succinic acid results in the formation of fumaric acid.  The reaction also requires an enzyme i.e., succinate dehydrogenase.  As a result two hydrogen atoms are released, which are picked up by the hydrogen carrier molecules i.e., FAD (flavin adenine dinucleotide).

With the addition of water, fumaric acid is converts into malic acid. This reaction also requires an enzyme, fumarase.

In the last step of Krebs cycle, oxidation of malic acid regenerates oxaloacetic acid in the presence of enzyme, malate dehydrogenase.

Oxaloacetic acid picks up another molecule of activated acetate to repeat the cycle.  A molecule of glucose yields two molecules of NADH2, 2 ATP and 2 pyruvate while undergoing glycolysis.  In Krebs cycle there is a complete degradation of 2 molecules of pyruvate to form 2 molecules of ATP, 8 NADH2 and 2 FADH2. 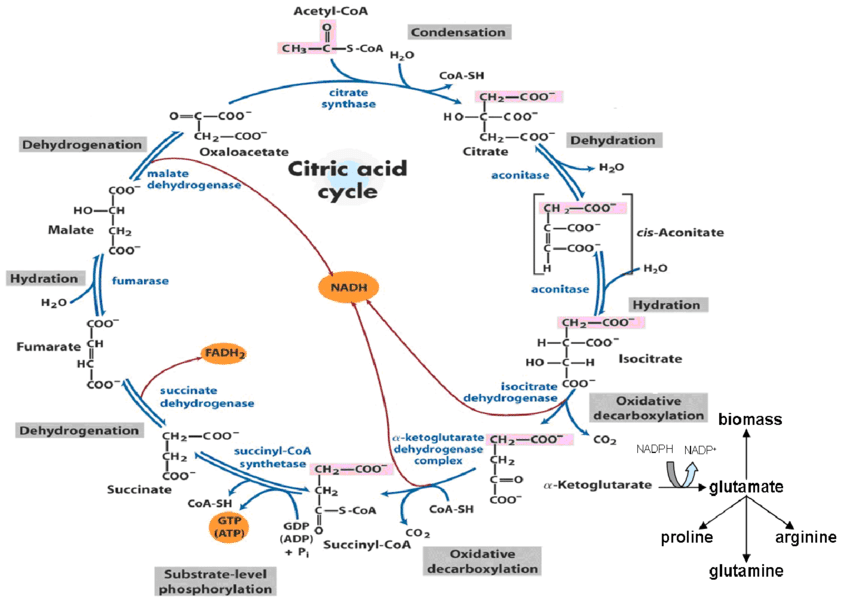 Difference between Krebs Cycle and Glycolysis

Following are the differences between Krebs cycle and Glycolysis :