Nutrition is a process by which an organism obtains its nutrients and utilizes them for its various activities like respiration, growth, repair and replacement.

Nutrients are substances that an organism obtains from its surroundings.

Photosynthesis is the process by which green plants use sunlight to make food from simpler molecule like carbon dioxide and water.

Ingestion : Engulfs food with the help of pseudopodia to form a food vacuole.

Absorption : The digested food is absorbed.

Assimilation : Soluble part of digested food diffuses into the cytoplasm and is utilized by the cell to release energy.

Egestion : Undigested food remains in the food vacuole and is thrown out from any point on the membrane.

2. Tongue : Moves the food in mouth and mixes it thoroughly with saliva.

3. Oesophagus : The food moves down in the digestive tube due to the peristaltic movement (the rhythm contraction and relaxation of the muscular walls of digestive tract).

i) HCl – a) Kills bacteria
b) Makes the medium acidic.

ii) Mucus : It protects the wall from the corrosive action of HCl.

iii) Pepsin : It acts in acidic medium and digests proteins.

5. Pyloric-sphincter : It allows only a small quantity of food to pass from stomach to duodenum.

6. Duodenum : It receives the secretions of Liver and Pancreas.

9. Villi : Finger-like projections of the inner wall of small intestine. It increases the area for absorption of food. Richly supplied with blood vessels.

Definition : The process by which digested food is oxidised to release energy is called respiration. 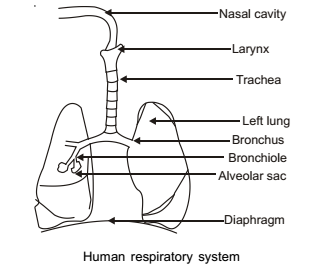 Functions of Various Parts of the Respiratory System

1. Nasal Cavity : Air comes into the nasal cavity through a pair of external nostrils. It is lined by a special epithelium by which air is filtered (by hair), moistened (by mucus) and warmed (by capillary network) before it enters the trachea. The dust particles are trapped by the mucous.

2. Glottis : A narrow slit-like opening through which air enters into the trachea.

3. Epiglottis : The epiglottis guards the glottis during swallowing of food; and does not allow any food particle to get into the trachea (reflex action).

4. Trachea : Connects pharynx to the lungs. It has C-shaped rings of cartilage that prevent collapse of trachea where there is not much air in it. It divides a number of times to form a network of bronchioles.

5. Bronchi : Within the lungs, each bronchus divides a number of times to form a network of bronchioles.

6. Bronchioles : Each bronchiole terminates into a sac called alveolar sac or alveolus.

7. Alveolar Sac : Each alveolar sac is extremely thin walled and looks like a bunch of grapes. It is surrounded by a network of blood capillaries. Exchange of gases takes place in the alveoli (O2 from the inhaled air diffuses into the blood, while CO2 from the blood diffuses out into the air of the alveoli).

8. Lungs : A pair of lungs are present in the thoracic cavity. Lungs are spongy, elastic bags consisting of bronchi, bronchioles and alveoli.

Transport of Materials in Plants

Plasma : Plasma is a straw coloured liquid with 92% water. It transports food, CO2 and nitrogenous wastes.

RBCs : They have an iron containing respiratory pigment-haemoglobin which helps to transport O2.

WBCs : They ingest and destroy bacteria and prevent the spread of infection.

Platelets : Help in clotting of the blood.

1. Transport of respiratory gases : O2 is carried by haemoglobin, (oxyhaemoglobin), to cells CO2 dissolved in plasma in carried from tissue to lungs.

2. Transport of nutrients: Digested food is absorbed into the blood in the small intestine.

3. Transport of waste products: Like urea, uric acid are carried to kidney.

All organisms are made up of cells. Cells work all the time for sustaining the life of an organism (biochemical reactions). These reactions produce toxic waste in the body and create an imbalance of ions.

Excretion is the process of removal of harmful metabolic waste from the body of an organism.

Osmoregulation is the process of controlling the amount of water and ions in the body of an organism.

Plants also produce waste products during their life processes but very slowly and in small amounts. Plants have no special organs for waste removal like animals.

The main waste products carbon dioxide, water vapour and oxygen are removed through the stomata and lenticels. Many plant wastes are stored in cellular vaculoes.

Plants store some waste products in their body parts, e.g. in leaves, dead tissues like bark or fruit.

Some plant wastes like resins, gums, oils and rubber are stored in old xylem and are useful to man.

Waste products are produced even when we sleep. They are carbon dioxide and urea.

Kidneys : Excrete urea, uric acid and water. There are 2 kidneys in man, in the abdominal cavity on either side of backbone. Urine collected in the kidneys passes down the ureters to the urinary bladder and passed out through the urethra.

Nephron : Each kidney consists of about a million long, coiled, fine tubules called nephrons. These are the functional units of kidneys. One each of each nephron has a hollow cup-Bowman’s capsule.

The Bowman’s capsule has a bundle of blood capillaries called glomerulus. One end of the glomerulus is to filter the blood passing through it. Only small molecules like glucose, amino acids, salts, urea and water collect in the Bowman’s capsule as filtrate. The filtrate collects in the collecting duct of the kidneys from where it is carried to the ureter and ultimately, passed out. Large molecules, like protein, go back to blood capillaries.