Light is a form of energy.

Light behaves as a particle and a wave.

Phenomenon of change in the path of light rays into the same medium is called reflection.

When light incident on a body gets scattered in various directions, it is called irregular reflection.

According to the 2nd law of reflection, incident ray, reflected ray and normal, all lie in the same plane.

Laws of reflection are obeyed under all conditions.

When we see our image in a plane mirror, it is laterally inverted. It is of the same size and is at the same distance from the mirror.

Real image can be taken on screen and it is formed by intersection of real rays, i.e., actually meet at that point.

Virtual image is seen in the mirror and it is formed by intersection of rays when they are produced i.e., rays actually do not meet at that point.

Spherical mirrors are of two types: i) concave and ii) convex.

Convex mirror is also diverging mirror and it diverges the rays incident on it.

As, convex mirror forms virtual and erect image, it is used as rear-view mirror in vehicles. With the help of a convex mirror a wider view of traffic behind the vehicles can be seen.

Rays of light always begin or travel from object.

All the distances are measured from the pole of spherical mirror.

Distance above the principal axis is taken as positive and below it is taken as negative.

In spherical mirrors for virtual image, distance v will be positive and real image distance would be negative.

If medium on which light falls is transparent, maximum amount of light is refracted.

The change in path of a light ray, when it enters one medium from another, is known as refraction of light.

The change in the path of light ray, while passing from one transparent medium to another is due to change in speed of light.

When light passes from rarer to denser medium, it bends towards the normal , and velocity and wavelength of light decreases, whereas frequency remains unchanged.

When light passes from denser to rarer medium, it bends away from the normal, and velocity and wavelength of light increases whereas frequency remains unchanged.

According to the laws of reflection (i) incident ray, refracted ray and normal all lie in one plane and (ii0 the ratio of sine of angle of incidence (sin i) to the singe of angle of refraction (sin r) is always constant for two given mediums. It is also known as Snell’s Law.

If path of light is reversed, then light ray retraces its path, this is known as principle of reversibility of light.

When light falls on a rectangular glass sab, it undergoes refraction twice once at first interface and then at the other. But angle of deviation between initial and emergent ray is zero i.e., these rays are parallel , but laterally displaced.

A convex lens is thicker at the middle and thinner at the ends. It is also called a converging lens.

A concave lens is thinner at the middle and thicker at the end. It is also called a diverging lens.

The straight line passing through the centre of curvatures of the two surfaces of a lens is called principal axis.

The centre of a thin lens is known as optical centre.

In case of a concave lens, images formed by a real object are virtual, erect and diminished.

Rays always begin from object. Distances are always measured from optical centre of a lens.

Two essential conditions for total internal reflection are:
a) Ray should travel from denser to rarer medium.
b) Angle of incidence must be greater than critical angle. 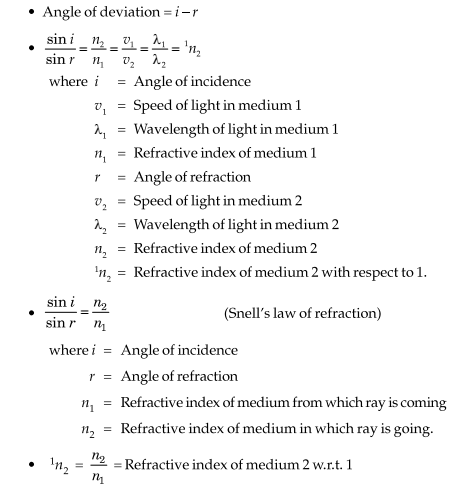 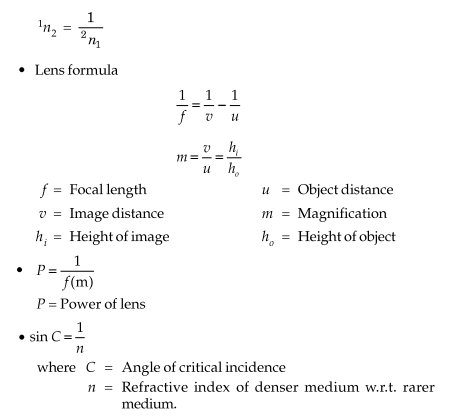