Question 1 : Define the principal focus of a concave mirror.

Answer : A point on the principal axis where the parallel rays of light meet after getting reflected from a concave mirror.

Question 2 : The radius of curvature of a spherical mirror is 20 cm. What is its focal length?

Question 3 : Name a mirror that can give an erect and enlarged image of an object.

Question 4 : Why do we prefer a convex mirror as rear-view mirror in vehicles?

Answer : A convex mirror forms erect and diminished image of objects behind the vehicle due to which large traffic can be easily viewed.

Question 1 : Find the focal length of a convex mirror whose radius of curvature is 32 cm.

Question 2 : A concave mirror produces three times magnified (enlarged) real image of an object placed at 10 cm in front of it. Where is the image located?

Image is formed 30 cm in front of the mirror.

Question 1 : A ray of light travelling in air obliquely into water. Does the ray bend towards the normal or away from the normal, why?

Answer : The ray will be bend towards the normal as speed of light decreases when ray enters from air to water, i.e., from rarer to denser medium.

Answer : The medium with highest optical density in diamond Refractive index of diamond = 2.42.

The medium with lowest optical density is air.

Question 4 : You are given kerosene, turpentine and water. In which of these does the light travel fastest? Use the information given in Table.

Answer : We know that

Question 5 : The refractive index of diamond is 2.42. What is the meaning of this statement?

Answer : It means that when light travels trough diamond its speed decreases by a factor of 2.42.

Answer : A lens whose focal length is one meter has optical power of 1 dioptre.

Question 2 : A convex lens forms a real and inverted image of a needle at a distance of 50 cm from it. Where is the needle placed in front of the convex lens if the image is equal to the size of the objects? Also find the power of the lens. 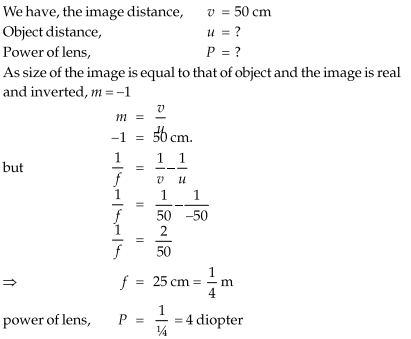 Question 3 : Find the power of a concave lens of focal length 2 m.

Question 1 : Which one of the following material cannot be used to make a lens?

Question 2 : The image formed by a concave mirror is observed to be virtual, erect and larger than the object. Where should be the position of the object?

Answer : d) Between the pole of the mirror and its principal focus.

Question 3 : Where should an object be placed in front of a convex lens to get a real image of the size of the object?

Answer : b) At twice the focal length.

Question 4 : A spherical mirror and a thin spherical lens have each a focal length of -15 cm. The mirror and the lens are likely to be

Answer : a) both concave.

Question 5 : No matter how far you stand from a mirror, your image appears erect. The mirror is likely to be

a) plane
b) concave
c) convex
d) either plane or convex

Answer : d) either plane or convex.

Question 6 : Which of the following lenses would you prefer to use while reading smell letters found in a dictionary?

Question 7 : We wish to obtain an erect image of an object, using a concave mirror of focal length 15 cm. What should be the range of distance of the object from the mirror? What is the nature of the image? Is the image larger or smaller than the object? Draw a ray diagram to show the image formation in this case.

For erect image object must be placed between the pole of the mirror and its focus i.e. 0 cm < u < 15 cm.

Question 8 : Name the type of mirror used in the following situations:

Support your answer with reason.

Answer : a) Concave mirror : So that beam of light covers large distance of the road in front of car.

b) Convex mirror : So that view of large traffic behind can be seen ‘erect’ in a small mirror.

c) Concave mirror : So that parallel rays of light coming from the Sun can be concentrated.

Question 9 : One-half of a convex lens is covered with a black paper. Will this lens produce a complete image of an object? Verify your answer experimentally. Explain your observations.

Answer : Yes, it will produce a complete image, but intensity of light in the image may be little less.

Question 10 : An object 5 cm in length is held 25 cm away from a converging lens of focal length 10 cm. Draw the ray diagram and find the position, size and the nature of the image formed.

Question 11 : A concave lens of focal length 15 cm forms an image 10 cm from the lens. How far is the object placed from the lens? Draw the ray diagram. 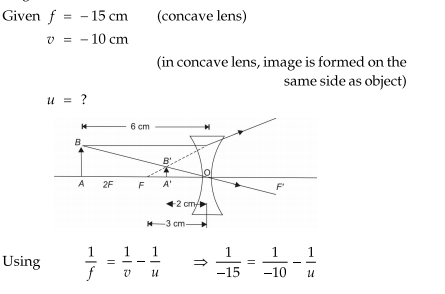 Question 12 : An object is placed at a distance of 10 cm from a convex mirror of focal length 15 cm. Find the position and nature of the image. 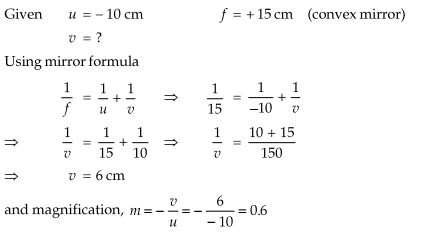 Image is formed 6 cm behind the mirror. It is virtual, erect and diminished.

Question 13 : The magnification produced by a plane mirror is +1. What does this mean?

Answer : Image is of the same size as object and image is virtual.

Question 14 : An object 5.0 cm in length is placed at a distance of 20 cm in front of a convex mirror of radius of curvature 30 cm. Find the position of the image, its nature and size. 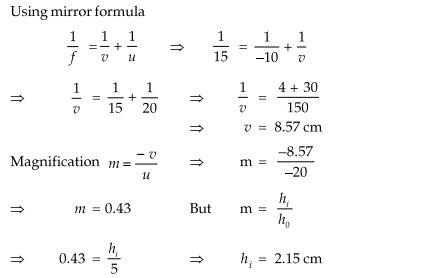 So image is formed behind the mirror at a distance of 8.57 cm; and its image is erect, virtual and of size 2.15 cm.

Question 15 : An object of size 7.0 cm is placed at 27 cm in front of a concave mirror of focal length 18 cm. At what distance from the mirror should a screen be placed, so that a sharp focussed image can be obtained? Find the size and the nature of the image. 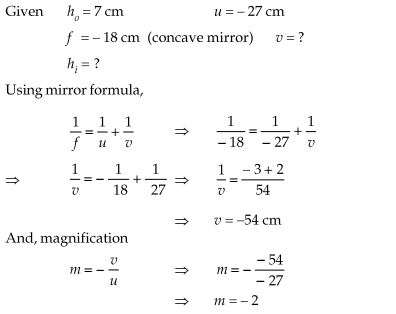 So, screen be placed at a distance of 54 cm in front of the mirror. Image formed is twice the size of object, real and inverted. 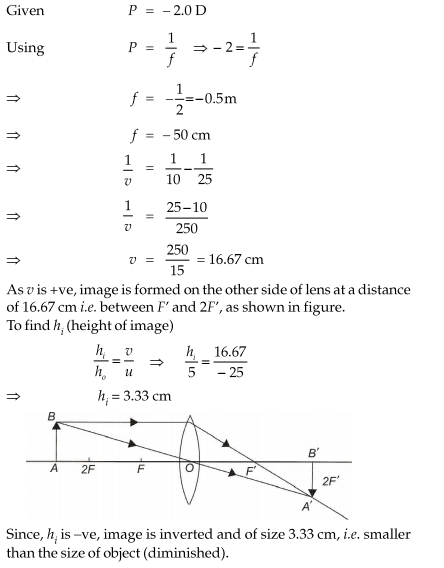 Question 17 : A doctor has prescribed a corrective lens of power +1.5D. Find the focal length of the lens. Is the prescribed lens diverging or converging?

The lens is converging as power / focal length is positive.