The phenomenon of inheritance of genes together and to retain their parental combination even in the offspring is termed as linkage.

Mendel’s principle of independent assortment shows exception. It came to notice when Bateson and Punnet noted that two pairs of alleles in pea plant did not assort independently.

They crossed pea plants having blue flower (B) and long pollen (L) with pea plants having red flowers (b) and round pollen (l). A test cross between heterozygous blue long (BbLl) and double recessive red round (bbll) shows that the frequency of parental combination is 7 times greater than the non parental combinations. The expected result should have been different i.e., the total parental frequency should have been equal to the recombinant or non parental frequency.

The greatest frequency of parental combinations and the lesser frequency of the recombinants indicate that the genes did not assort independently. The two parental genes tend to move together and appear to be linked together.  Bateson and Punnet describe it as genetic coupling and repulsion. Morgan while working on Drosophila melanogaster described the above as linkage.

Morgan and Castle formulated the chromosome theory of linkage which has the following characteristics:

The characters for which ratios were obtained by Mendel for segregation and independent assortment were present on different chromosomes. But, in pea, as in other organisms there would always be more genes than chromosomes. Therefore, each chromosome should carry many genes. All the genes located on the same chromosomes are termed as linked genes and the phenomenon as linkage. Each such chromosome forms one linkage group. The number of linkage groups would thus be equal to haploid number of chromosomes in an organism.

Under these circumstances, there could be two possibilities amongst genes present on the same chromosome:

Linkage was first demonstrated by Bateson and Punnet (1906) in sweet pea (Lathyrus Odoratus). This demonstration did not give Mendelian ratios.

A plant homozygous for blue flowers and long pollen (BBLL) was crossed with another individual homozygous for red flowers and round pollen (bbll). F1 progeny shows blue flowers and long pollen, the genotype being (BbLl). A test cross between F1 hybrid (BbLl) and its double recessive parent (bbll) results in a ratio, 7:1:1:7, instead of 1:1:1:1 . This indicates the tendency of dominant alleles to remain together.  A similar tendency for recessive alleles was also observed.  This was termed gametic coupling, coupling phase or cis phase.

Similarly when two such dominant or recessive alleles come from different parents, they tend to remain separate. This is termed as repulsion phase or trans phase.  In repulsion phase, one of the parents had blue flowers and round pollen (BBll). The other parent had red flowers and long pollen (bbLL).  F1 hybrid shows blue flower and long pollen (BbLl). A test cross between F1 hybrid (BbLl) and its double recessive parent (bbll) results in a ratio, 1:7:7:1, instead of normal 1:1:1:1. This shows that dormant alleles coming from different parents remain separate and do not form many recombinations. The same is true for recessive alleles.

Bateson termed his results as coupling and repulsion hypothesis. Later it was found that both these are parts of the same phenomenon of linkage. The frequencies obtained in the test cross in Lathyrus showing linked genes can be compared with those obtained in a test cross where independent assortment takes place. It shows that a test cross involving two independently assorting genes (dihybrid test cross) produces 4 phenotypes with 25 percent each. Out of these, two parental frequencies ( 50%) are equal to the total recombinant frequencies (50%).

Back cross of these F1 male hybrids with a double recessive female having black body and vestigial wings (bbvv), produce offspring of two types in equal proportion. These offspring resemble the two grandparents.

In majority of cases homologous chromosomes undergo breakage and reunion during gametogenesis. During reunion the broken pieces of chromatids  exchange (i.e., crossing over) producing some non parental (i.e., new combination). Therefore the linkage is incomplete.

But in a test cross when the F1 female hybrid are cross pollinated with the pollen from a plant having colourless and shrunken seeds (double recessive) four types of seeds are produced. 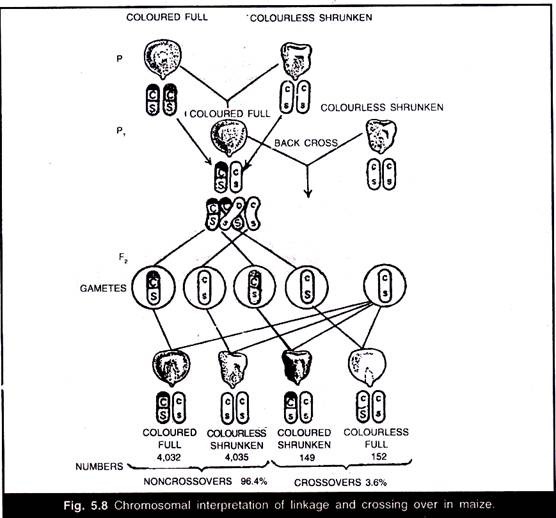