Reproduction is the process of formation of new individuals of a species from the preexisting ones.  Plants show two types of reproduction, asexual and sexual.

In agamospermy, the seeds possess an embryo developed not from a diploid zygote but by an abnormally formed diploid egg.  In such cases, not only the egg but the entire embryo sac is diploid because it develops without meiosis either from a megaspore mother cell or any cell of the nucellus.

The diploid egg of an embryo sac, thus formed, directly develops into an embryo without fusion with the male gamete.  The process of development of egg into an embryo without fertilization is called parthenogenesis.  Besides this, embryos are also produced directly from the cells of the nucellus.  This is called adventive polyembryony.  It results in the formation of many embryos in each seed.  The example is Citrus seed which contains 2 to 40 embryos.

Different plant parts are variously modified for vegetative propagation.  Some of these are as follows: 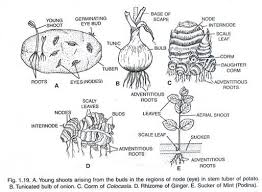 The roots help in vegetative propagation.  Some common examples of root tubers are sweet potato (Ipomoea batatas), Asparagaus, Dahlia etc.  These roots develop adventitious buds, each of which forms plant.   When placed in soil the buds present on the roots grow into leafy shoots called slips.  Slips are separated and planted to form new plants.The roots of some woody plants produce shoots which grow into new plant.  For example, Murraya, Albizzia, Dalbergia Sisso etc.

Leaves of a number of plants develop adventitious buds for vegetative propagation.  For example, leaf tip of Walking Fern (Adiantum caudatum), marginal notches in Kalanchoe and Bryophyllum.  In Bryophyllum, daigremontianum, the marginal buds sprout while the leaf is attached to the plant.  In some other plants, the buds develop when the leaf is injured or detached or placed over a moist cell.  For example, Begonia (elephant ear). 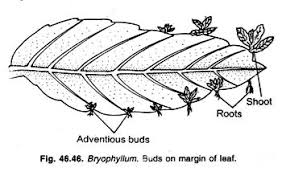 Bulbils:  They are fleshy buds which develop into new plants after falling on the soil for example Agave, Oxalis, Ananas sativa (pineapple), Dioscorrea, lily, Chlorophytum.  Some of them are modified floral buds.  For example, Agave.  In Dioscorrea, they develop in the axils of leaves while in Oxalis, they occur above the base of the fleshy root.

Turions:  They are flesh buds that develop in aquatic plants for perennation and propagation.  For example, Potamogeton, Utricularia.

Aerial shoots:  A stem segment of Opuntia and other cacti develop into a new plant after falling on the soil. A segment of sugarcane having at least a single node is used in agriculture to produce new plant.