Both, prokaryotes and eukaryotes require DNA dependent RNA polymerase  for transcription. This enzyme moves along the template DNA to produce mRNA in 5′ to 3′ direction. Ribonucleotide triphosphates are used as substrates (rNTs). In this reaction, alpha phosphate group of the incoming rNTP is transferred to 3′ hydroxyl group of the elongating RNA chain.

It consists of three different regions of DNA such as- promoter region, the structural gene and the terminator.

In addition to providing the binding site for polymerase, the promoter also guides polymerase to starting sequence and the direction in which it has to proceed. The first nucleotide corresponding to the position at which transcription begins is represented as +1 and is termed as the transcription start site. The start point is purine in over 90% cases and upstream from the start point is six bp region termed as Pribnow box.

Transcription terminates when RNA polymerase reaches the stop signal present on DNA. These DNA sequences are termed as terminators. Here, the enzyme stops adding nucleotides to the growing RNA chain, releases the RNA transcript and dissociates from the DNA template.

Biological information carried by structural gene is present in its nucleotide sequence. This is essentially a set of instructions for the synthesis of RNA molecule that may eventually produce an enzyme or a protein molecule.

Transcription unit and the gene

The term gene was proposed by Johanssen in 1909. According to old and classical concept gene is an independent hereditary unit that can control a function resulting into phenotypic appearance of the concerned character. Today gene is defined as segment of DNA which carries biological information for the formation of RNA molecule or polypeptide.

It is the functional unit of inheritance. Further studies reveal that gene is a complex structure that can perform more than one function.

It consists of many regions which can independently undergo mutation or recombination. A gene therefore may have one or more functional units. Seymour Benzer (1962), therefore, coined the terms such as cistron, recon and muton to explain the nature of different forms of gene.

It is also termed as structural gene. This is a part of DNA capable of synthesis of a single polypeptide chain. A gene infact consists of several cistrons.

This is the smallest segment of DNA that can undergo recombination.

This is the smallest part of DNA that can undergo mutation.

In a transcription unit, cistron refers to a part of DNA that can code for a polypeptide.  Thus, the pieces of DNA coding for tRNA or rRNA also represent a gene. Cistron or structural gene that takes part in transcription could be monocistronic (as in eukaryotes) or polycistronic (as in prokaryotes).

The intervening sequences or introns do not contribute to the formation of mature RNA. Such a structure of eukaryotic gene defies the definition of ‘a gene as a piece of DNA molecule’. Transcription unit influences inheritance. The structural gene also consists of promoter and regulatory sequences. Regulatory sequences are very often termed as regulatory genes.

The transfer of genetic information from DNA to RNA is termed as transcription. The process of transcription is almost similar to DNA replication accept that adenine pairs with uracil in place of thymine.

RNA polymerases binds to promoter region of the DNA and the process of transcription begins.  RNA polymerases moves along DNA helix and unwinds it. One of the two strands of DNA serves as a template for RNA synthesis.This results in the formation of complementary RNA strand at the speed of about 40 to 50 nucleotides per second.  RNA synthesis comes to stop when RNA polymerase reaches the terminator sequence.

Complementary strand thus formed does not bind to DNA template by hydrogen and hence it separates easily. This mRNA strand gets degraded by cellular ribonucleases once its function is over.

Following are the three major steps:

The start signals on DNA are termed as promoters. All promoter region has an AT- rich region, about 10 bases before the start of mRNA synthesis. This region has a common sequence of TATAAT and is commonly termed as TATA box. RNA polymerase binds to this promoter. Besides this, it requires sigma (σ) factor for the recognition of correct start signals on DNA. The RNA-DNA hybrid form thus initiates.

RNA polymerase copies the DNA sequence accurately. Elongation takes place only in 5′ to 3′ direction. It occurs at a speed of about 30 nucleotides per second. The first nucleotide incorporated is always A or G.

Transcription or mRNA synthesis is terminates when RNA polymerase reaches the stop signal on DNA. A termination factor or rho factor causes the release of transcribed mRNA molecules. The termination signal recognised by RNA polymerase on DNA is a GC- rich region (in prokaryotes) while in eukaryotes it also seems to occur in AT-rich regions. 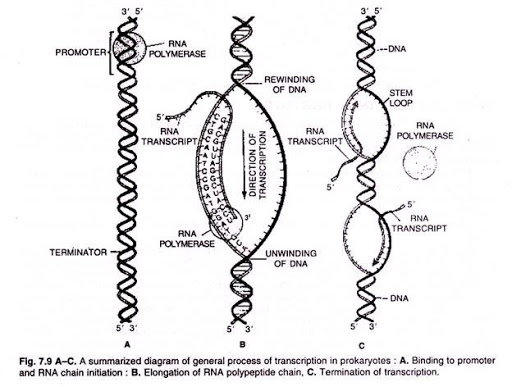