Translocation of Solutes in Plants

The process through which synthesized food and other solutes are translocated to different parts of the plant is called translocation of solutes.

The organic food materials synthesized in the leaves are translocated downwards in the soluble form for consumption and storage.

Upward translocation of food takes place during the germination of seeds, formation of new stems and leaves, formation and development of new buds and fruits.

It takes place in plants from the cells of the pith to cortex.

In higher plants, food materials are translocated to different organs of the plant through vascular system.  The xylem elements are mainly involved in ascent of sap and phloem elements in the translocation of food.

Path of downward translocation of food

The food materials synthesized in leaves are translocated downwards in soluble form through the sieve tubes of phloem element.  It has been confirmed by various experiments and the best experiment is ringing experiment.

A ring of bark including phloem is removed from the stem of a plant.  The stem part from where the tissue has been removed is closed or sealed with the help of melted wax.  After seven to eight days, the tissue above the ring swells and develops adventitious roots while the lower part of the ring portion gradually dries up.  This is because the downward translocation of food material stops and the food material accumulates just above the ring.  If in this experiment, phloem is not removed from the ring, the swelling in the upper portion does not occur.  This indicates that the food material synthesized is translocated through the phloem in downward direction. 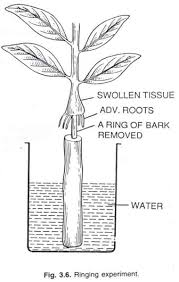 Most of the physiologists shared a common view that these mineral salts are translocated upwards through xylem element of the stem.  But Curtis has shown that a large proportion of minerals including nitrogen compound were transported into upper part of woody shoot when xylem was removed.  Stout and Hoagland (1939) employed the radioactive tracer technique.  They made about 9-inch long incision on the main stem and carefully pulled the bark away from xylem and inserted a paper coated with paraffin wax in between the two tissues.  Radioactive potassium was added to the rooting medium.  The concentration of radioactive mineral was found at various levels in the stem near and in the area of separation of xylem and phloem.  The data showed that in the stripped area little concentration of minerals occured in the bark though its amount was quite high on the xylem.  Greater amount of mineral in the bark above and below the strip is due to local absorption of minerals from xylem by living cells of bark but there is little translocation through it.

Through xylem, the absorbed minerals are passed into leaves.  From leaves, the mineral salts reach other parts through phloem.

Radial translocation of solutes from pith to cortex takes place through medullary rays.

Mechanism of Translocation of Solute in Phloem

The various theories regarding the Mechanism of translocation of solute through phloem are as follows:

According to this hypothesis, the translocation of food materials in sieve tube of phloem takes place through diffusion.  Leaves contain food material in concentrated form which diffuse towards the root.

Objections regarding this hypothesis:

b).  Diffusion is a physical process whereas translocation of food materials in phloem is a biological process.

According to D Vries(1885)and Curtis (1935), soluble food materials in sieve tubes move from one end to the other end due to cytoplasmic streaming. Objections regarding this hypothesis:

a).  Old sieve tube elements which actively participate in translocation of solute do not show streaming of cytoplasm.

b).  The speed of streaming of protoplasm at normal temperature and pressure fails to account for extremely rapid movement of solute molecules in majority of plants.

This theory was given by Munch (1930) and supported by Craft (1938).  According to this hypothesis, soluble food material in phloem show mass flow. Food is synthesized in mesophyll cells of the leaves due to which osmotic pressure in mesophyll cell is increased, resulting in absorption of water by xylem through endosmosis.

This theory can be explained with the help of a simple experiment. Two bulbs, A and B with selective permeability, are interconnected through a tube. Here A is comparable to mesophyll cells, B to the root cells and the tube to phloem which form a closed system.  Bulb A contains stronger solution of sucrose than bulb B.

Both the bulbs are completely embedded in water. Here A corresponds to supply end, B to consumption end and tube to sieve tube system. The outer vessel having water corresponds to xylem.  Water enters into both the bulbs but turgor is developed in bulb A.

This increased turgor pressure is soon transmitted throughout the system and consequently, greater osmotic pressure is developed in the water of the bulb B than the pure water outside.  Water, therefore, passes out from bulb B which results in the continuous flow of solution from A to B through the connecting tube.

This process continues till the strength of sugar solution in both the bulbs becomes equal.