Deficiency Symptoms and Role of Mineral Elements in Plants

Deficiency symptoms are externally visible pathological conditions caused due to the deficiency of  some essential mineral elements. The deficiency of an element in the plant body hampers the growth, development and metabolism.

Plants absorb nitrogen mainly in the form of nitrate ions. It is a structural component of amino acid, nitrogenous bases, nucleic acid etc.  Nitrogen is also present in the porphyrin structure of chlorophyll, cytochrome enzymes and some plant hormones.

Nitrogen is essential for protein synthesis, cell division, growth. It also plays an important role in photosynthesis and metabolic activities.

Chlorosis is the main symptom of nitrogen deficiency. The leaves gradually become pale and yellow.  The symptom first appears in old leaves and later in the young leaves.

Another characteristic symptom of nitrogen deficiency is the development of anthocyanin in stems, leaf veins and petioles. This causes red and purple streaks or patches.

Other effects include suppressed shoot growth, sparse foliage, thin and weak stems, early defoliation and suppression of flowering and fruiting. 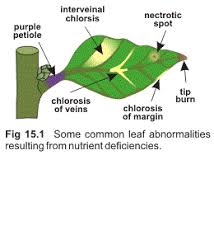 The plants obtain phosphorus from soil in the form of soluble phosphates. The maximum accumulation of phosphorus is found in rapidly growing region such as meristematic region and maturing fruits and seeds.

Plants become stunted and older leaves fall down.  Anthocyanin pigments develop in the leaves and leaf veins.  In extreme cases, necrotic areas develop on leaves, petioles and fruits.  A characteristic feature of phosphorus deficiency is the tremendous increase in the activity of the enzyme, phosphatase.

Potassium acts as an activator in protein metabolism and it is also needed for DNA polymerase.  It is also required in the synthesis and translocation of carbohydrates, cell division, development of chlorophyll, photosynthesis, respiration, protein synthesis, maintenance of cell turgidity, stomatal movements and reduction of nitrates. Potassium also controls cellular organisation, hydration and permeability.

Potassium deficiency usually begins with a characteristic mottled chlorosis of older leaves that gradually spreads to younger leaves. The plants show rosette or bushy habit of growth due to loss of apical dominance.  The stem becomes weak and the resistance of plants to pathogens is lowered.  Consequently, the plants are easily lodged and attacked by diseases.

Plants obtain calcium in the form of calcium ions.  It occurs abundantly in non-exchangeable form such as anorthite. Calcium is one of the constituents of the middle lamella of the cell wall.  There, it occurs as calcium pectate.

It affects the permeability of cytoplasmic membrane.  It also plays an important role in lipid metabolism, cell division and cell enlargement.  Calcium combines with organic acid into insoluble calcium oxalate which does not injure protoplasm.  It favours translocation of carbohydrates and amino acids.  Calcium encourages root development.  It also activates several enzymes.

Plants obtain sulphur from soil as sulphate ions.  It is found in all parts of plants.

Sulphur is a constituent of amino acids like cystine, cysteine and methionine, vitamins like biotin and thiamine and coenzyme A.  It helps in chlorophyll formation, growth metabolism. It also helps  in the formation of nodules in legumes.

It occurs in the soil in the form of oxides and hydroxides.  Plants absorb iron as ferric ions.  It is found in all parts of plant in small quantities, but it accumulates in leaf veins.

It plays an important role in energy conversion reactions of photosynthesis and respiration.  It is also essential for the synthesis of chlorophyll and synthesis of protein.

Deficiency results in interveinal chlorosis.  In extreme deficiency, scorching of leaf margins and tips may occur.

Manganese activates enzymes of respiration, photosynthesis and nitrogen metabolism performing oxidation, reduction, decarboxylation and photolysis. It is also involved in the formation of the chloroplast because in the absence of manganese the chloroplasts become light sensitive and ultimately disintegrate.

It is available to the plants mostly as molybdate.

It plays an important role in the fixation and assimilation of nitrogen. It also acts as an activator for nitrate reductase enzyme.

Plants absorb boron from the soil as boric acid and tetraborate anions.

It helps in the absorption and translocation of carbohydrates. Boron plays an important role in active salt absorption, cell division and pollen germination.  It also helps in the synthesis of pectins, proteins and nucleic acid.

Deficiency causes death of root and shoot tips. Hence death of plant may also occur. Loss of apical dominance, stunted growth, small size of fruits, and rosetting of leaves are also the signs of boron deficiency.

Plants absorb divalent form of copper (Cu++) from the soil.

It is a part of plastocyanin which acts as an electron carrier in photosynthetic reaction.

Bivalent form of zinc is readily available in the soil.

Zinc is essential for the synthesis of tryptophan and protein synthesis.  It also acts as an activator of several enzymes.

Plants absorb chlorine from the soil as chloride ions.

It acts as an enzyme activator and stimulates photosynthesis. 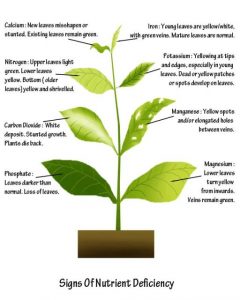