Plants absorb mineral salts from the soil through the roots.  The zones of elongation and the root hairs are responsible for the mineral salt absorption.  They are then translocated to various parts. The minerals are absorbed as ions.  Plants accumulate the ions against their concentration in the soil.  Plant cells, tissues or organs when placed in mineral solution show two phases in mineral absorption; initial and metabolic.

In the initial phase there is rapid uptake of ions into outer or free space of the cells.  This outer space consists of intercellular spaces and cell walls.  The ions absorbed in free space are freely exchangeable.

In the metabolic phase the ions pass into the inner space.  The inner space comprises cytoplasm and vacuole.  Here the ions are not freely exchangeable.

When the absorption of solute or salt takes place without the expenditure of metabolic energy and salt enters into the plant cell by free diffusion it is termed as passive absorption.  It can be explained by the following theories:

Transport of ions across the membrane occurs passively by simple diffusion and facilitated diffusion.

It is also termed as non-mediated diffusion.  In this type of diffusion, ions while moving across the membranes do not associate themselves with the constituents of the membranes.  Single ion channels are present in the membranes.  They are transmembrane proteins which function as selective pores for the diffusion of ions.

Similarly there are aquaporins for the diffusion of water.  The channels known as aquaporins permit diffusion of substrate in both directions through the membranes.  The substances move only in the direction of lower concentration.  The channel proteins do not bind the molecules or ions to be transported.  No energy is required for keeping the pores open or maintaining solubility of matrix. 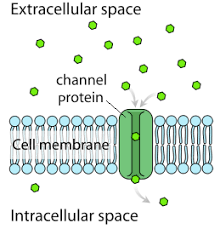 The rate of transport through channels is much higher than by transport proteins.

The process of facilitated diffusion involves the following steps:

According to this theory, ions from the external solution exchange with the ions of similar charge adsorbed on the surface of the cell wall or membranes of the tissue.  The colloidal fraction of the soil has an important role in ion exchange.  These colloidal particles called micelles, possess negative charge and attract cations such as calcium, magnesium, potassium, ammonium, sodium etc.

Similarly, the root surface which assumes a negative charge carries many cations on its surface.  These cations may exchange with other cations present in the soil solution.  Thus, a new cation can be absorbed on the root surface.  The process of exchange between adsorbed ions in the solution is termed as ion exchange. Following two theories can explain the ion exchange mechanism.

An ion which adsorbs electrostatically to a solid particle is not tightly bound.  But it oscillates within a small volume of space.  This volume is termed as oscillation volume.  Therefore, the cations and anions adsorbed to the surface of root cell membranes or clay particles oscillate in limited area.

Respiration occurring in a root cell results in the production of carbon dioxide, which forms H2 CO3 when dissolved in water.  The carbonic acid dissociates into H+ ion and HCO3- ion.  These ions then may be exchanged for similar charged ions of the soil solution. 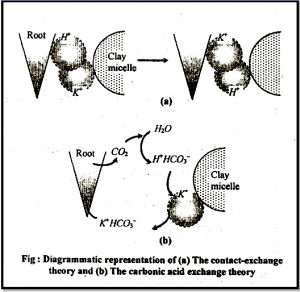 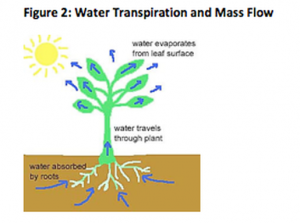