Molecular mutations, means permanent alterations in sequences of nucleotides in the nucleic acid, which forms the genetic material. Mutation at the molecular level refers to any addition, deletion or substitution of the nucleotide bases in the DNA.

These alterations in base sequences may be of the following types:

3.Inversion of a sequence  and

4.Replacement of a base pair

Deletions, insertions and inversions include those changes in base sequences which involve breakage and reunion of DNA segments. However, replacement of a base pair may take place during replication of DNA without any breakage of DNA.

Alterations during replication of nucleic acids

Incorporation of base analogues

5-bromouracil, 5-chlorouracil and 5-iodouracil can replace thymine in DNA. But 2-aminopurine incorporates in such a small amount that it is not possible to find out which base it replaces.

Although these base analogues are much less inhibitory for bacterial and phage growth than other purine and pyrimidine analogues, yet they are much more mutagenic.

It can pair with adenine just like thymine. Occasionally 5-bromouracil loses a hydrogen atom in position 1 and pairs with guanine instead of adenine. This pairing mistake may occur at the time of incorporation or after incorporation at the time of replication. Hence both kinds of transitions, G-C into A-T and A-T into G-C should be inducible.

The higher frequency of pairing mistakes are due to higher electronegativity of Br in Bu as compared to methyl group in thymine (methyl uracil). The pyrimidine ring gets poorer in electrons and thus can lose H- atom at position 1 more easily than in thymine, thus giving rise to enol form. 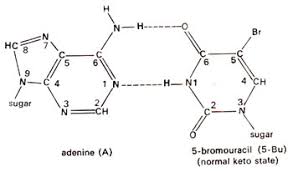 Fig: Molecular Mutations (Base pairing between adenine and normal keto state of 5-bromouracil) 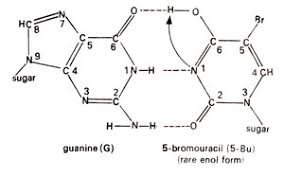 Fig:Molecular Mutations (Base pairing between adenine and rare enol form of 5-bromouracil)

2- Aminopurine can pair with thymine by two hydrogen bonds and with cytosine by a single bond. The pairing involving two bonds is more common, since in the other case, nitrogen in AP and nitrogen in cytosine repel each other and cause their separation. Incorporation of AP at place of guanine to give a AP-C base pair will cause mutation in subsequent generations. Similarly a mistake in replication after incorporation of AP, leading to the formation of AP-T base pair may lead to a mutation. AP will thus induce transitions in both directions. 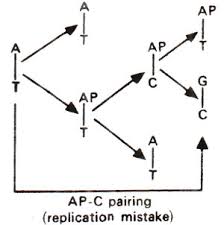 Azaserine is one of the strongest mutagen inhibiting purine synthesis. Since this is also an alkylating agent, its mutagenicity may be due to its alkylating ability rather than its inhibitory action.

Similarly urethane is an inhibitor of pyrimidine synthesis and also a mild alkylating agent. Thymine  inhibits the production of chromosome breaks by urethane. It is possible that lack of one base either causes breaks or causes pairing mistakes. It is also possible that the inhibitor causes the formation of another base analogue which is the actual mutagen.

Nitrous acid deaminates, the bases G,C and A with decreasing frequency in DNA and with equal frequencies in RNA. Its mutagenic effect was analysed for tobacco mosaic virus (TMV), bacteria, phages, yeast and other organisms. HNO2 deaminates adenine to hypoxanthine, cytosine to uracil and guanine to xanthine. H pairs with C; U pairs with A and X with C. Thus HNO2 may bring about changes like AT to GC (due to deamination of A to H);GC  to AT (due to deamination of C to U), but no change is brought about in the deamination of guanine to xanthine. 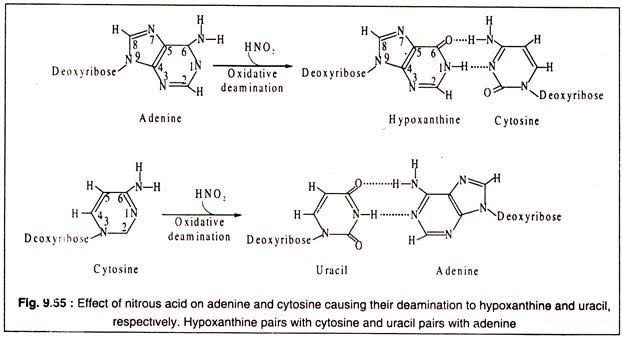 Fig:Molecular Mutations (Effect of nitrous acid on adenine and cytosine) 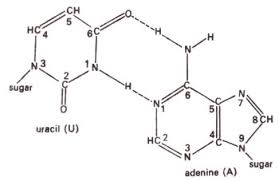 Fig: Molecular Mutations (Base pairing between adenine and uracil)

In DNA, cytosine is the strongest reacting base when treated with hydroxylamine. Therefore it is possible that the major mutagenic effect of HA is due to alteration of C. Hydroxylamine probably causes hydroxylation of cytosine at amino group giving rise to hydroxylcytosine, which then subsequently pairs with adenine. This is because the hydroxyl-amino group should be more electronegative than amino group (due to electronegative oxygen) and hence this hydroxylated molecule should be more frequently in the tautomeric form having a hydrogen atom in the place of nitrogen at position-3. This tautomeric form cannot pair with guanine but can pair with adenine. Thus we should expect that the effect of hydroxylamine on DNA  induces base pair transitions predominantly.

The effect of hydrazine lies in breaking the rings of uracil and cytosine giving rise to pyrazolone and 3-aminopyrasole respectively. Treatment of RNA by anhydrous hydrazine producers ribo-apyramidinic acid free of pyrimidines and the treatment of DNA produces the corresponding apyrimidinic acid.

When phosphate group is alkylated, unstable phosphate triester is formed, which hydrolyses to return the alkyl group. If enough alkyl groups remain attached till the time of duplication, the duplication might be inhibited. The attached alkyl group may, but not necessarily, interfere with replication in such a manner that non-complementary bases may be incorporated.

2.Hydrolysis of triester between sugar and phosphate

Hydrolysis of phosphate triester may take place between sugar and phosphate and thus causes the breakage of backbone. This will be lethal or cause larger alterations, but will not cause point mutations.

Alkylation of guanine at 7th position gives rise to quaternary nitrogen which is unstable. This either hydrolyzes away the alkyl group or else alkylated purine separates from deoxyribose sugar living it depurinated. The gap may then interfere with DNA duplication or may cause incorporation of wrong bases. The  depurinated DNA is also more labile and may undergo breakage in the backbone soon after. This may induce large alterations or may be lethal but will not cause point mutations.