Mutations can be artificially produced by certain agents termed as mutagens on mutagenic agents. Muller (1927) was the first to produce induced mutations in Drosophila by exposing them to X-rays.

Following are the two major classes of mutagens:

Radiations are the most important physical mutagens. H.J. Muller who used X-rays to increase the rate of nutrition in Drosophila opened an entirely new field in inducing mutations. The spectrum of wavelengths that are shorter (i.e., of higher energy) than the visible light can be subdivided into following two groups:

The main source of spontaneous mutations are the natural radiations coming from the cosmic rays of the sun. They occur in small amounts in the environment and are termed as background radiations.

The following are biological effects of radiations:

The ionizing radiations include X-rays, gamma rays, alpha rays and beta rays. Since alpha rays and beta rays do not penetrate the human skin, these do not affect the internal body cells. Ionizing radiations cause breaks in the chromosome. These cells then show abnormal cell divisions. If these include gametes, they may be abnormal and even die prematurely. Different types of cancers are the result of radiations. The frequency of induced mutation is directly proportional to the dose of radiations. 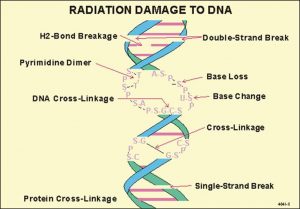 Large number of chemical mutagens are now known. These are more injurious to man than radiations. The first chemical mutagen discovered was mustard gas by C. Aurebach et al; during world war II.

The following are the effects of the chemical mutagens:

These include nitrogen and sulphur mustards, methyl and ethylsulphonate ethylnitroso urea (MMS and EMS), nitrosoguanidine (NTG), ethylethane sulphonates (EES), etc. These chemicals are mutagenic to both replicating and non replicating DNA. The major effect includes the transfer of methyl or ethyl groups to the bases in such a way that their base pairing potential changes producing transitions .

Nitrous acid is mutagenic to both replicating and non replicating DNA. It is a deaminating agent which changes cytosine to uracil, guanine to xanthine, and adenine to hypoxanthine. It acts directly by oxidative deamination on A (adenine), G (guanine) and C (cytosine) bases which contain amino groups. A is deaminated to hypoxanthine which is complementary to cytosine. G  converts to xanthine that, though pairs which C has only two hydrogen bonds between them. C (cytosine)  converts to U (uracil) which pairs with A (adenine). In this way nitrous acid induces AT GC (adenine-thymine guanine-cytosine) transitions.

They are tar derived heteroaromatic flat molecules from which a number of dyes and pharmaceuticals are prepared. Acridines and proflavins are powerful mutagens. Acridines such as acriflavine, proflavine, euflavine, acridine orange can intercalate between DNA bases and interfere with DNA replication, producing insertion or deletion of single bases. This induces frameshift mutations or gibberish mutation. The frame of nucleotide sequence of DNA will be thus disturbed and read differently. 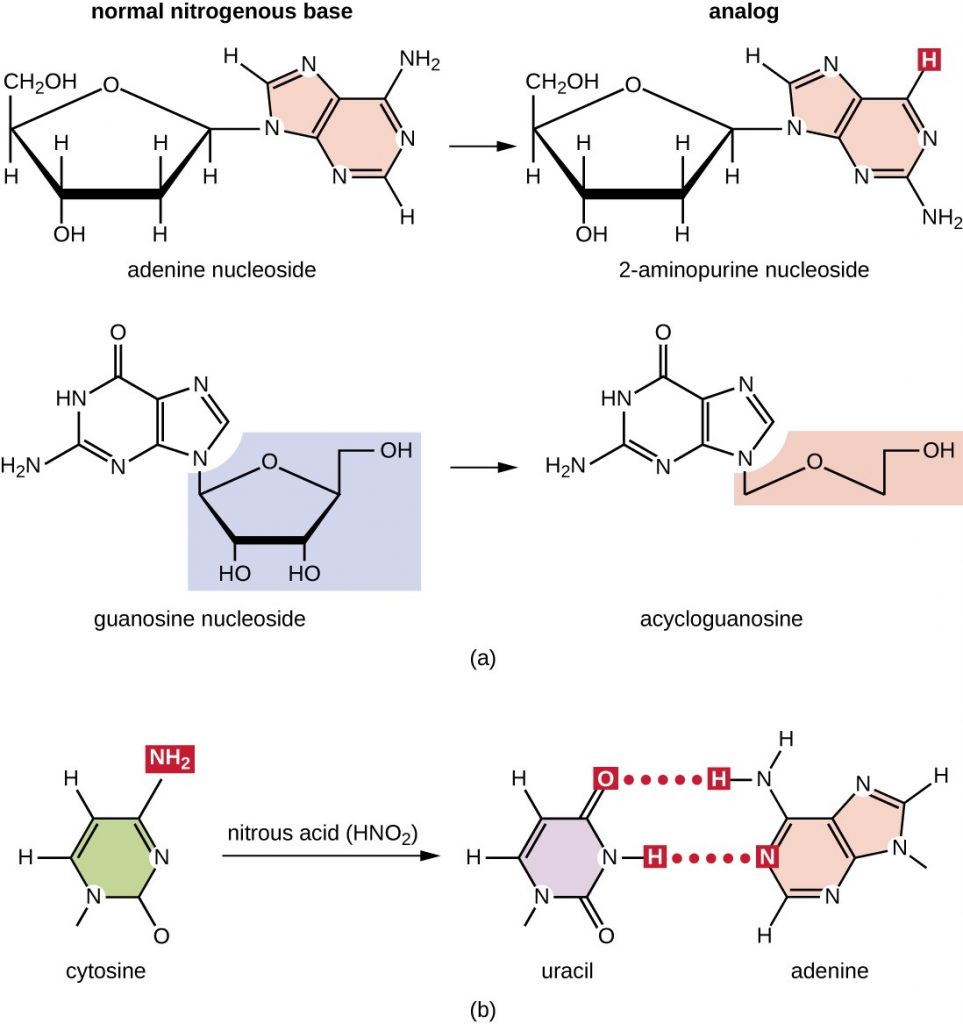