Mutations include all those heritable changes, which alter the phenotype of an individual. Hugo de Vries used the term mutation to describe the phenotypic changes which were heritable.

Mutation was first discovered by Seth Wright in 1791 in male lamb having unusual short legs. The scientific study of mutations started in 1910, when T.H. Morgan started his work on fruitfly, i.e., Drosophila melanogaster.

A classification based on the method of detection of mutations includes the following main types:

The mutation rates, per gene replication or per cell division could be measured in organisms such as bacteriophages, bacteria or unicellular algae such as Chlamydomonas, where from the number of mutant cells and normal cells, an estimation of number of cell divisions can be made.

Mutation frequencies can also be expressed in terms of whole genome irrespective of genes involved. For instance, in Drosophila, an estimated number of genes is 5,000 and since average mutation frequency at a particular locus is one in 100,000, we should expect that one out of every 20 flies should have a mutation. In man this frequency is perhaps higher.

Physical and chemical mutagens are the main mutagens for inducing mutations artificially.

These are mainly radiations, although change in pH value (acidity) or temperature shocks may also induce mutations.

Detection of Mutations in Drosophila

One of the two X chromosomes in a female fly carried all these three features and the other X chromosome was normal. Male  flies irradiated for induction of mutations where crossed to CIB females. Male progeny receiving CIB X-chromosome will die. The CIB female flies obtained in progeny can be detected by barred phenotype. These are crossed to normal males. In the next generation 50% of males receiving CIB X- chromosome will die. The Other 50% males will receive X chromosome, which may or may not carry the induced mutation. In case lethal mutation was induced no males will be observed. On the other hand, if no lethal mutation was induced 50% males will survive. Thus, the CIB method was the most efficient method for detecting sex-linked lethal mutations. 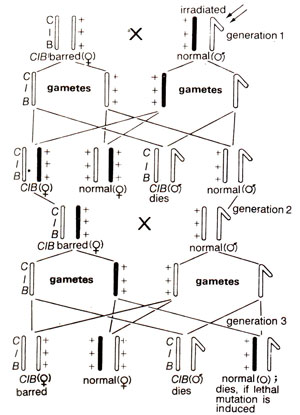 This method uses Muller 5 Drosophila stock, which carries two marker genes, dominant Bar ( Barred eye) and recessive apricot, but does not carry a lethal as in CIB. Moreover Muller 5 contains a more complex inversion and therefore, has a better crossover suppressor than in CIB . In F2 generation, 50% males are Muller 5 phenotype and remaining 50% are wild-type. Induction of a lethal mutation  in X chromosome of irradiated male will show no wild type males in F2 generation. Therefore, absence of wild type males in F2 is an indication of induced lethal mutation. 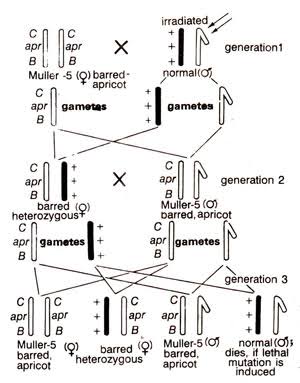 Detection of sex during the visible mutations:

For detection of sex linked visible mutations this method requires Muller 5 and attached X chromosomes . The attached X females have a special advantage. When these females are crossed to an irradiated male, X chromosome of irradiated male goes either to super female daughters or to the sons. Since in sons there is a single X chromosome, any visible induced mutation will immediately express itself.

Detection of mutation in plants

L.J.  Stadler studied frequencies of spontaneous mutations in maize for endosperm characters. Following were the steps:

When we use a plant species, where no marker stocks are available and the purpose is to study visible mutations in genome as a whole, then the mutations are studied by segregation in M2 generation. It involves the following steps: