The nitrogen cycle is a biogeochemical cycle in which the elemental nitrogen (N2) converts into a form that is useful in biological processes.  Atmosphere is a reservoir of free gaseous nitrogen. Nitrogen is a component of amino acids, proteins and enzymes, nucleotides and nucleic acids which form important structural and functional constituents of living protoplasm.

The nitrogen compounds occur in the bodies of organisms and in the soil. But living organisms, except some nitrogen fixing bacteria, cannot use elemental nitrogen directly.  First it converts into nitrates and then the plants use it. The gaseous nitrogen of the atmosphere is converted into reduced (NH4+) or oxidized (NO3 -) forms . The root nodule bacteria, some other bacteria and blue green algae convert the gaseous nitrogen into nitrates soluble in water.

Plants utilise nitrates  in the synthesis of amino acids and proteins. Herbivores graze over plants and consume the plant protein.  The dead plants and animal bodies and their excreta are decomposed by various organisms. This process releases gaseous nitrogen . This cycling involves stages such as nitrogen fixation, assimilation, ammonification, nitrification and denitrification.

Nitrogen fixation is a process by which nitrogen (N2) in the atmosphere converts into ammonia (NH3). This conversion is done by two methods namely; non biological and biological methods.

This method includes the atmospheric nitrogen fixation. Oxygen combines with nitrogen in photochemical and electrochemical reactions to produce oxides of nitrogen. They dissolve in rain water and pass into soil or water. Here they combine with other salts to produce nitrates.

An associative symbiosis occurs between a bacterium (i.e., Azospirillum ) which grows on the surface of roots of a number of tropical grasses. Nitrogen fixing bacteria convert nitrogen into ammonia which combines with organic acids to produce amino acids.

Nitrate ion absorbed by plants changes to ammonium state before incorporating into amino acids. Absorbed ammonia is used directly for this purpose. Amino acids give rise to chemicals like proteins and nucleotides from which nucleic acids are formed. Animals obtain their requirement of organic nitrogen from the plant protein. The plant protein first changes to amino acids which then forms animal proteins, nucleic acids, etc.

The decomposition of organic matter of plant and animal origin by microorganisms in the soil, releasing ammonia and amino acids is termed as ammonification. During the metabolism of proteins, animals produce a number of nitrogenous waste of products such as ammonia, urea and uric acid. The dead bodies of plants and animals also possess nitrogenous compounds. Both are acted upon by the decomposers or the ammonifying organisms such as Bacillus species, actinomycetes and some fungi.  As a result, they release ammonia and utilise the remaining organic acids for the body building.

The soil retains the  ammonia or it may escape to the atmosphere . Under certain conditions, oxidation of ammonia into nitrates may also take place. Conditions such as low cation exchange capacity, alkalinity (i.e., high pH), high temperature and dryness favour the release of ammonia as gas into the air. Volcanic eruptions also possess ammonia. Most of the ammonia present in the soil is acted upon by the nitrifying organisms.

A group of microorganisms convert ammonia into nitrates in a process termed as nitrification. Two different types of bacteria (i.e., nitrifying bacteria) carry out the nitrification process.  The reaction occurs in two steps i.e., nitrite formation and nitrate formation. Bacteria such as Nitrosomonas Nitrospira, Nitrosogloea and Nitrococcus are responsible for the conversion of ammonia into nitrites. Subsequently other bacteria such as Nitrobacter and Nitrocystis aid the oxidation of nitrite into nitrate (i.e., the conversion of nitrites into nitrates). Thus the nitrates become available to the plants for absorption. These involve energy yielding reactions. Thus the bacteria use this energy in carbon assimilation.

Denitrification is the reduction of nitrates to nitrogen, ammonia or to some oxides of nitrogen. It takes place under special conditions in both terrestrial and marine ecosystems. Because our atmosphere is rich in oxygen, denitrification only takes place in some soils and groundwater, wetlands, poorly ventilated corners of the ocean, and in seafloor sediments.

It occurs in the soil, mainly in anaerobic conditions.  In water logged soil and other anaerobic areas, some bacteria use the oxygen of nitrates for meeting their requirements.
This reduces nitrate into gaseous forms of nitrogen which escape into the atmosphere. Bacteria such as Bacillus cereus, Bacillus licheniformis, Pseudomonas denitrificans, Micrococcus, Achromobacter and Thiobacillus denitrificans are responsible for the denitrification process.

The nitrates are lost through leaching and precipitation. It becomes the constituent of rocks. This process is termed as sedimentation of nitrogen. Weathering of these rocks release nitrogen.

Biological mineralisation regenerates nitrogen. Thus, the plants, animals and microbes store a large part of nitrogen. Plants absorb nitrate from the soil. The nitrate converts to organic nitrogen. The consumers consume fraction of nitrogen present in plant tissues. Ultimately all dead remains convert into detritus. The decomposers or the ammonifying organisms decompose it releasing ammonia. Thus the cycle goes on. 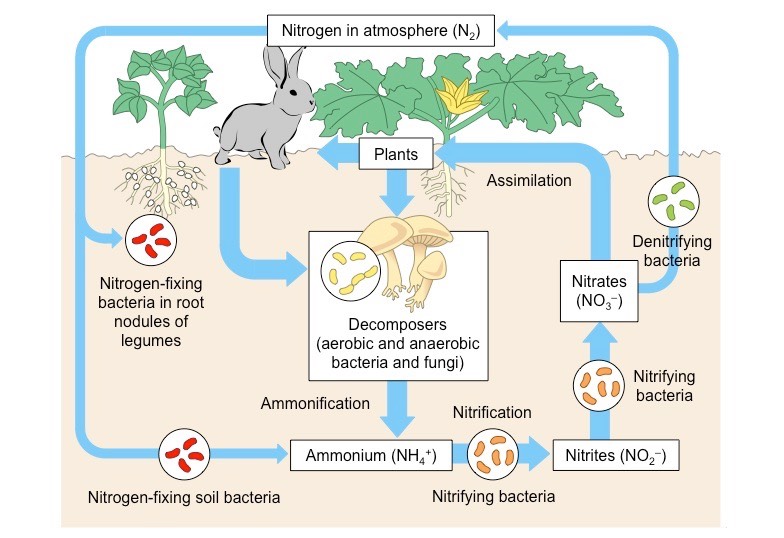