The process of conversion of free nitrogen of the atmosphere into utilisable compounds of nitrogen such as nitrate, ammonia, amino acids etc is termed as nitrogen fixation.  About 78% of nitrogen is present in the atmosphere which exists in the form of an inert gas.

Hence the plants cannot use molecular nitrogen. It is therefore, necessary to fix free nitrogen of the atmosphere into some elements or compounds in soil converting them into nitrogenous salts to make them available for plants as nutrients.

Fixation of nitrogen into the soil takes place by the process of rainfall, electric discharge due to thunderstorm and due to the activity of microorganisms.

During thunder and lightening, N2 and O2 of atmosphere react to form NO (nitric oxide).

The nitrogen oxides dissolve in water to form nitric acid and nitrous acid.  They enter into the soil along with rain water and react with alkaline earth metals to form corresponding nitrate and nitrite salt.

Nitrogen is fixed asymbiotically in the soil by free living microorganism.  Asymbiotic or free nitrogen fixers can be classified into three groups,

(a)  Aerobic bacteria, for example, Azotobacter.

(b)  Anaerobic bacteria, for example, Clostridium, Rhodospirillum and

(c)  Blue green algae, or cyanobacteria, for example, Anabaena, Nostoc, Aulosira, Cylindrospermum, Trichodesmium.  Aulosira is the most active nitrogen fixer in rice fields while Cylindrospermum is active in sugarcane and maize fields.

These microorganisms are abundant in the soil and contribute to the nitrogen content of the soil.  All nitrogen fixing blue green algae (Cyanobacteria) possess long, thick-walled colourless cells called heterocysts.  Heterocysts are the site of nitrogen fixation.

A proper amount of minerals like molybdenum, iron and calcium in the soil is essential for nitrogen fixation.  Moreover, all nitrogen fixing microorganisms require molybdenum for their activity.

Nitrogen fixation is a reductive process which requires the following:

Following is the process of asymbiotic biological nitrogen fixation :

1:  Pyruvic acid is broken down into acetyl-PO4 and hydrogen is released.

3:  Acetyl phosphate reacts with ADP to form ATP and acetate.

4:  In the presence of ATP and reduced ferredoxin, molecular N2 is adsorbed on the surface of enzyme nitrogenase.

5:  Transfer of H+ ion takes place to N2 and reduction of N2 takes place until it is completely reduced to NH3.

Symbiotic nitrogen fixers are those which fix nitrogen being associated symbiotically with other plants.  The symbiotic fixers include Rhizobium, Nostoc, Anabaena and the plants include legumes (root nodules), cycas (coralloid roots) etc.

The most common forms of symbiotic nitrogen fixing bacteria (e g., several species of Rhizobium) occur in the root of the members of Leguminosae.  Besides these, many other vascular plants (e g.,Casuarina, Myrica, Purshia, Cerococarpus etc) are also host to nitrogen fixing microorganisms. In some plants nodules also occur on stems (e g., Aeschynomene, Sesbania ) and leaves (for example ,Psychotria, Azolla).

Symbiotic nitrogen fixers in leguminous plants inhabit small knob-like protuberance called nodules on the roots of the plant.  These nodules vary considerably in their shape and size.  They may be spherical and may have finger-like projections.  Their size vary from pin head to 1 cm in diameter.

Mechanism of formation of nodules:

This mucilaginous threads or infection threads stimulate the outer cortical cells to increase the DNA content of the nuclei, as a result of which, the chromosome compliment becomes polypoid.  Repeated division of these polypoid cells form nodules.

Bacteria in the nodules secrete a growth hormone called indole acetic acid (IAA).  It stimulates the nodules to grow in size.  As a result, they become effectively supplied with vascular tissue.

Bacterial cells multiple rapidly inside infected host cell. The cells as a result are  transferred into swollen form called bacteroides.  The functional nodule contains a reddish pigment called leghemoglobin (hemoglobin of legumes). It is a oxygen scavenger and is related to blood pigment haemoglobin. Leghemoglobin protects nitrogen fixing enzyme nitrogenase from oxygen.

This pigment appears to be an oxygen carrier in the process of nitrogen fixation in nodules. Hence, it facilitates the diffusion of oxygen to the vigorously respiring bacteria within the cells of nodules, thereby stimulating the production of ATP.  Nitrogen fixation requires ATP.  Therefore, cells lacking leghemoglobin are not capable of fixing nitrogen. 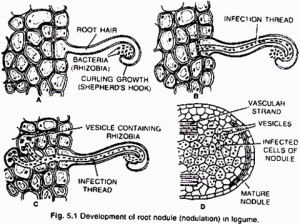 In various fertilizer industries, compression of atmospheric N2 and H2  takes place at a particular temperature and pressure to produce ammonia (NH3) by Haber’s process.  NH3 then converts into different fertilizers including urea.