Mechanism of opening and closing of stomata 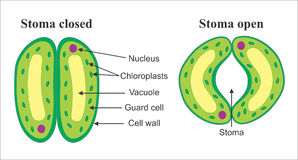 Fig: Opening and Closing of Stomata

Various hypothesis are given to explain the stomatal movement from time to time.  Some of them are given below:

Opening and closing of stomata is mainly due to the turgidity of guard cell.  It again depends on the concentration of soluble sugar present in it.  According to Lloyd (1908) chloroplast present inside the guard cell synthesizes the soluble sugar or carbohydrate during the daytime and at night these sugars convert into starch.

At night, the soluble sugar accumulates in the form of insoluble starch.  As a result the osmotic concentration of the guard cell decreases.  The guard cell, as a result of which, becomes flaccid and the stomata is closed.

The reasons for criticism of the starch sugar hypothesis is as follows: 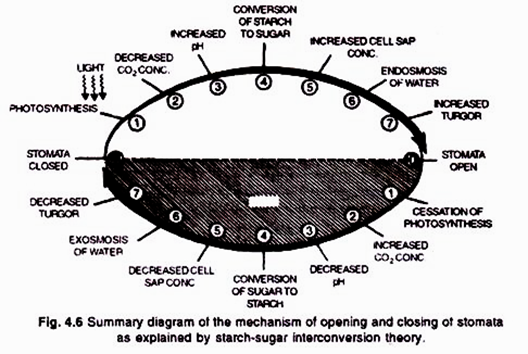 Fig: Opening and Closing of Stomata

Sayre modified the view of Lloyd.  According to him, pH determines the interconversion of starch into sugar .  During daytime carbon dioxide liberated due to respiration is used in photosynthesis by the mesophyll cells.  As a result pH increases to 7-.75. In this alkaline state, starch converts into glucose-1-PO4.

In the dark, carbon dioxide accumulates in the intercellular spaces because it is not used in photosynthesis.  It lowers the pH of the guard cells. In this acidic state, glucose1-PO4 converts into starch and the stomata closes.

Steward did not accept the above hypothesis due to the following reasons:

Opening of stomata in light involves the following steps:

Closing of the stomata in dark involves the following steps:

Comparison of opening and closing of stomata in light and dark