Plant cell contains a solution inside it called cell sap.  The concentration of cell sap is higher than that of water.  So when it is immersed into water diffusion of water molecules into the cell takes place by osmosis.  Gradually the cell sap gets diluted and the cell is stretched.

Permeability is the degree of diffusion of gases, liquids and dissolved substances through a membrane.  The four types of membranes are as follows:

Experiment to demonstrate the process of osmosis:

A peeled potato tuber is taken and a hole into the tuber is made by means of a cork borer.  Sugar solution is poured into the hole.  A glass tube is fitted into the mouth of the hole, such that it touches the sugar solution.  The whole thing is kept inside a beaker of water.

As a result water molecules from the beaker diffuse into the tuber.  After sometime the volume of the liquid inside the tuber increases. So this experiment demonstrates the process of osmosis taking place through the potato tuber. 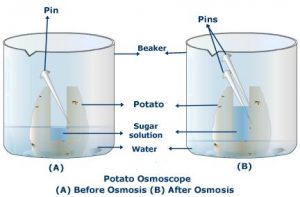 The maximum amount of pressure that can be developed in a solution separated from solvent by a semipermeable membrane is called osmotic pressure.

The osmotic pressure of a solution increases with increase in temperature.

An electrolytic compound has more solute particles. A cell kept in 0.5 M solution of sucrose, does not change the volume because it is isotonic to the cell contents.

However, if the same cell is kept in 0.5 M solution of sodium chloride, which is an electrolyte, the osmotic pressure of the solution increases.

Significance of Osmosis for plants

Plant cells remain surrounded by rigid cell wall.  A plant cell when kept inside water, swells due to endosmosis.  As a result, a pressure developes in protoplasm. The actual pressure which the protoplast exerts on the cell wall is the turgor pressure (T.P).

The external force responsible for the entry of water will be, therefore O.P-T.P.  The relationship of O.P, T.P, W.P and D.P.D is as follows:

Difference between Diffusion and Osmosis