Ecology : The study of the interaction of living organisms with each other and their surroundings is called ecology.

The biotic and non-biotic components of the environment together constitute the natural environment.

Ecosystem : All interacting organisms in an area together with the non-living constituents of environment.

Biotic component of environment : It includes producers, consumers and decomposers. The biotic component of our environment includes all living organisms like microorganisms, plants, animals and humans. They may be grouped according to the manner in which they obtain their sustenance from the environment.
i) Producers : Organisms which can convert inorganic raw materials to organic compounds, e.g., plants can produce their own food by the process of photosynthesis. Apart from providing food for animals, they help in maintaining balance of carbon dioxide and oxygen in nature. They help in recycling the matter from abiotic components to living word. They can convert solar energy into chemical energy of food. They are also called autotrophs.
ii) Consumers : Animals in the environment are called consumers as they cannot manufacture their own food and depend on plants and other animals for their food. The food of consumers consists of organic compounds produced by other living organisms.
a) Herbivores or Primary consumers : The animals who feed on greed plants, e.g., cow, buffalo, sheep, goat, etc.
b) Carnivores : The animals which feed on other animals, e.g., tiger, lion. Carnivore or the secondary consumer in an animal that devours the flesh of herbivore or other animals. Similarly, larger carnivores can be categorised as tertiary consumers and so on.
iii) Decomposers : They are also heterotrophs. They convert dead organic matter into simpler compounds, e.g., bacteria and fungi. Unlike consumers, the decomposers do not ingest their food. Instead, they release different enzymes from their bodies into the dead and decaying plant and animal remains. The extracellular digestion of the dead remains leads to release of simpler inorganic substances which are then utilized by the producers.

Food Chain : Various biotic levels, i.e., producers and different types of consumers are arranged at various levels showing interactions in the environment. The process of one organism eating the other and getting eaten by another organism forms a chain. The chain of who eats whom in nature is called a food chain.

1. A food chain transfers:
a) Matter in the form of food
b) Energy 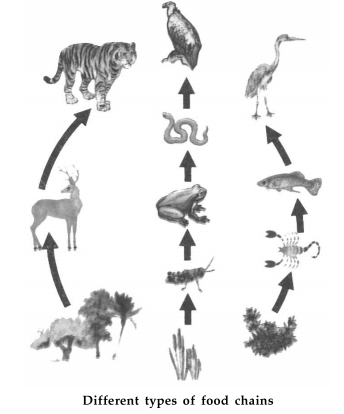 2. Each step in a food chain trough which the flow of energy and matter takes place is referred to as trophic level. 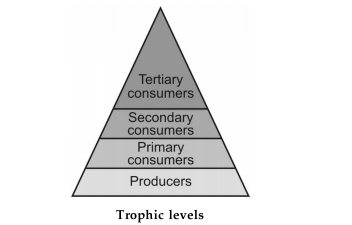 3. Food web : It is a network of food links between population in a community. Different food chains are often interconnected, e.g., a specific herbivore of one food chain may serve as food of carnivores of several other food chains. Such interconnected network like pattern formed due to interlinked food chain in an ecosystem is called food web. 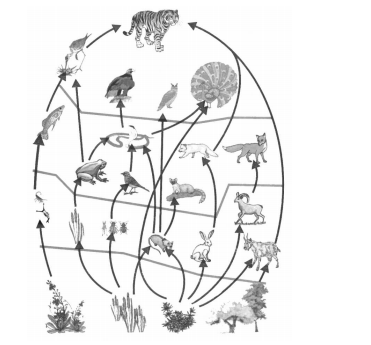 The agents/substances which cause such changes are called pollutants. It is caused because of over population, industrialization, urbanization, agriculture and deforestation.

Ozone holes :  O3 or ozone is a deadly poison formed from oxygen O2 due to the effect of UV rays of sun.

Thus, ozone prevents these UV rays from reaching the earth. Some harmful chemicals like CFCs are used in refrigeration, fire extinguishers and aerosol sprayers. When these items are discarded the chlorine and fluorine released by them react with ozone and breaks it down to oxygen. Depletion of ozone layer due to release of it will result in UV radiation reaching the earth, causing, skin cancer, damage to eyes and immune system.

Biological magnification : Progressive accumulation of non-biodegradable wastes at various trophic levels of food chain. Pesticides like DDT are sprayed to kill pests of crops or household. They seep into soil reaching groundwater or run off to water bodies. They are either absorbed by the roots of plants, water plants and animals or remain sticking to fruits and vegetable. In this manner they enter the food chains and get accumulated in our body (Bioaccumulation) causing disorders of kidneys, brain and circulatory system. Human are the worst sufferers in this case as we occupy the top position in most of the food chain. Further damage can be avoided by following organic farming i.e, using biodegradable chemical in agriculture like manures, biofertilizers, biocides or following techniques like crop rotation.

Eutrophication : Enrichment of a body of water causing excessive growth of producers and then death of these and other in habitants. Sometimes nitrates and phosphates enter a water body due to excessive fertilizers and pesticides being used in nearby crop fields. These are nutrients for the growth of water plants. As they overcrowd the water body, die and decompose, oxygen level of water goes down killing water animals too.

Greenhouse effect : Build-up of gases like methane and carbon dioxide in the atmosphere as a result of fossil fuel combustion which do not allow the radiated heat of sun to go back to upper atmosphere. Greenhouse effect, because of creating an abnormal rise in the earth’s average temperature, results in global warming. 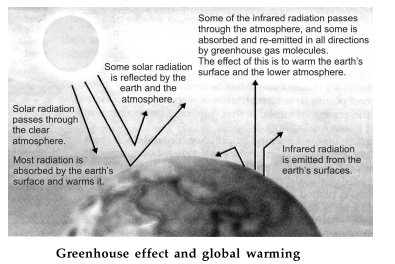