Oxidative phosphorylation is the synthesis of energy-rich ATP molecules with the help of energy liberated during oxidation of reduced coenzymes ( i.e.,NADH2 and FADH2), produced in respiration.  The synthesis of ATP requires an enzyme i.e., ATP synthase. The enzyme ATP synthase is considered to be the 5th complex of electron transport chain.  ATP synthase is present  in the F1 or headpiece of F0– F1 or elementary particles.  The particles are present in the inner mitochondrial membrane.

Mechanism of oxidative phosphorylation in mitochondria

ATP synthase becomes active in ATP formation only when there is a proton gradient having higher concentration of H+ or protons on the F0 side as compared to F1 side.  Pushing of protons with the help of energy liberated by passage of electrons from one carrier to another results in the increase in concentration of protons in the outer chamber or outer surface of inner mitochondrial membrane.

There is a higher proton concentration in the outer chamber .  As a result, the protons pass inwardly into matrix or inner chamber through the inner membrane.  The inner membrane possesses special proton channels in the region of F0 (base) of the F0- F1 particles.  The flow of protons through the F0 channel thus induces the F1 particle to function as ATP synthase.  The energy of proton gradient is used in attaching a phosphate radical to ATP by high-energy bond.  As a result, it produces ATP.  Oxidation of one molecule of NADH2 thus produces 3 ATP molecules while a similar oxidation of FADH2 forms only 2 ATP molecules. 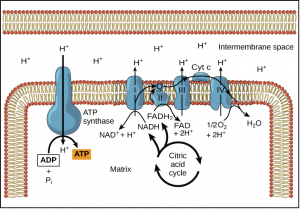 In aerobic respiration, complete oxidation of one glucose molecule produces 38 ATP molecules.  But the number of ATP molecules so produced may vary depending upon the mode of entry of NADH2 in mitochondria.   The two molecules of NADH2 formed in glycolysis cannot directly enter the membranes of mitochondria.  These enter into the mitochondria through a shuttle or indirect pathway. 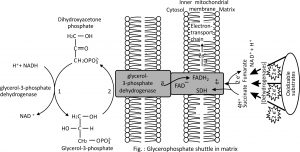 This shuttle occurs in animal tissues such as heart muscle, liver etc.  In this mechanism cytoplasmic NADH reduces oxalo acetic acid to malic acid which is carried across the inner mitochondrial membrane by a specific malate ketoglutarate transporter.  As a result , oxidation of malate or malic acid to oxaloacetic acid takes place inside the mitochondrion.

In this shuttle, malate accepts electrons from NADH2 .  This NADH enters the electron transport chain in order to yield ATP molecules.  Each molecule of NADH2 yields 3 ATP molecules and as such, complete oxidation of one molecule of glucose would yield 38 ATP molecules.

The shuttle continuously transfers electron from cytoplasm to mitochondria and does not allow the accumulation of hydrogen molecules in the cytoplasm. 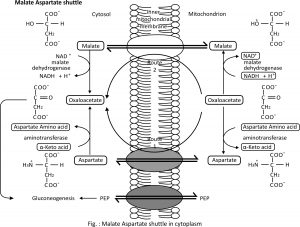 Uncoupling agents are compounds which dissociate the synthesis of ATP from the transport of electrons through the cytochrome system.  The electron transport continues to function, leading to oxygen consumption, but it inhibits the phosphorylation of ADP .  Following are few uncoupling agents or inhibitors: