The xylem elements inside the plants form a continuous column which remains filled with water.  Therefore, diffusion of water from the xylem elements at the top creates a tension on the water column present in the entire series of xylem vessels.  This tension along with diffusion pressure deficit pulls the water.

In this process, the force created at the upper part of plant plays important role and the root plays passive role.  The process does not depend upon supply of any energy, and therefore, the term passive absorption is used.

This theory involves apoplastic movement of water, i.e., water moves through intercellular space and cell wall in the cortex and simplest movement through endodermis and pericycle. 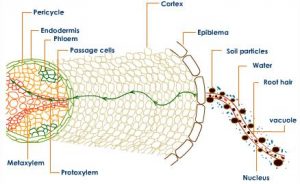 Pathway of water across the root cells

Water finally reaches up to the endodermis.  The endodermis cells are characterised to possess Casparian thickenings in their radial and transverse walls.  They are, therefore, impermeable to water.

Next to pericycle are situated  the xylem elements. The xylem elements lack turgor pressure and they always take water from adjacent pericycle.  Water which enters into xylem pericycle moves upward along the ascent of sap.

Most of the factors which affect the rate of water absorption are soil factors, although atmospheric condition also affects the process.  Some of the important factors are as follows:

Capillary water is the most effective soil water which is readily available to plants.  It is filled in the spaces between non colloidal soil particles.  Water is absorbed uniformly between the field capacity and permanent wilting percentage.  If water in soil is present below permanent wilting percentage or beyond field capacity, then the water absorption is affected.

At low temperature, the soil solution is more viscous, protoplasm is less permeable.  As a result the growth of root is inhibited.  These factors inhibit the absorption of water.  But increase in temperature above 30 degree centigrade causes decrease in the rate of absorption.

If the soil water is in form of concentrated solution (due to dissolved salt and mineral) its osmotic pressure will be greater than that of cell sap.  The water will tend to move out due to exosmosis rather than entering the root hair cell.  Thus, the concentration of soil inhibits the absorption of water.

Poorly aerated soil, particularly when it is deficient in oxygen retards absorption of water.  This is brought about by retarding growth and development of fresh root and also disturbing their metabolic activities.

In water-logged soil, all the pore spaces of soil get filled with water and air is driven out, hence the water absorption is slow.