Pathways of water movements in roots: Apoplast and Symplast pathways

Water from the soil comes into the plant mostly through root hairs in the piliferous layer of the root.  The root hairs are tubular extensions of epidermal cells and greatly increase surface area for absorption of water from soil.

Thus a gradient is maintained and flow of water across the root from epidermis to the xylem takes place in a down gradient of water potential via cortex, endodermis, pericycle and xylem parenchyma.

Certain epiphytes, for example, orchids, absorb moisture from the atmosphere by their special modified hanging roots.

Root hairs are the main water-absorbing organ of plants. The root hairs are responsible for absorption of water and mineral nutrients from the soil.  The root bears unicellular hairs, with the help of which it can absorb water from the soil.  It usually possesses a protective covering at the tip, known as root cap.  They develop in the region of maturation and their number varies from plant to plant.

The cell wall surrounds plasma membrane and thin layer of cytoplasm.  Plasma membrane along with cytoplasm acts as selectively permeable membrane. The cytoplasm encloses a central vacuole that contains cell sap.  Nucleus of the cell is generally present at the tip. 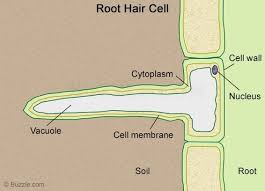 Apoplast and Symplast Pathways of water:

Munch (1932), a German physiologist introduced the concept of apoplast and symplast which is helpful in understanding the pathway of water movement through the root.

The interconnecting cell walls and intercellular spaces, including the water-filled nonliving xylem elements i.e., tracheids and vessels form one pathway, called the apoplast.

The other pathway is the living protoplast of the cell lying within the boundary of the selectively permeable membrane, called the symplast. 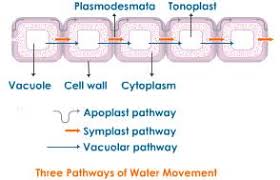 Here water passes from root hair to xylem through the walls of intervening cells without crossing any membrane or cytoplasm.  The pathway provides the least resistance to movement of water.  However, it is interrupted by the presence of impermeable lignosuberin casparian strips in the walls of endodermal cells.

The Casparian strips in the endodermal cell wall prevent the passage of water from outside to inside or back, unless it passes through the cell membrane and cytoplasm of the endodermal cells.  These strips contain waterproof substance called suberin which prevents apoplastic movement of water.

In this pathway, water and dissolved minerals never move through a cell’s plasmamembrane but instead travel through the porous cell walls that surround the plant cell. 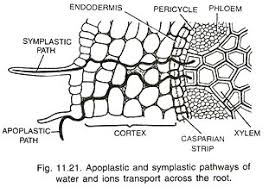 The symplast forms a continuous system. The cytoplasmic strands, called plasmodesmata connects the protoplast of the cortex, endodermis and vascular tissue from cell to cell.

In this pathway water passes from cell to cell through their protoplasm.  It does not enter the cell vacuoles.  Plasmodesmata connects the cytoplasm of the adjacent cells .  Water moves through water channels present in the plant cell plasmamembrane from one cell to the next until it reaches the xylem.

In this pathway each root cell functions as tiny osmotic system.  The root hair cell first absorbs water from soil through osmosis.  Then it passes into vacuoles of adjacent cortical cells through osmosis.  The process continues till water reaches the xylem parenchyma cells.

Apoplastic water is in constant equilibrium with water in the symplast and cell vacuoles.  Exchange of water constantly takes place across both the cell and the vacuolar membranes.  In fact, flow of water through cortex involves both the pathways. 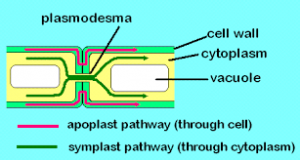