Question 1 : Did Dobereiner’s traids also exist in the columns of Newlands’ octaves? Compare and find out.

Question 2 : What were the limitations of Dobereiner’s classification?

Answer : Dobereiner could not classify all the elements into triads discovered at that time.

Question 3 : What were the limitations of Newlands’ law of octaves?

Answer : In order to ensure repeating of Newlands’ law of octaves in certain cases, Newlands placed two elements (Co and Ni) together. Moreover, his classification grouped together some elements which were very dissimilar , e.g., cobalt and nickel were placed with halogens which have all together different properties.

Question 1 : Use Mendeleev’s periodic table to predict the formulae for the oxides of the following elements : K, C, Al, Si, Ba 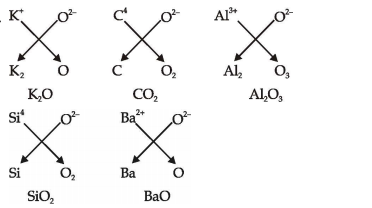 Question 2 : Besides gallium, which other elements have since been discovered that were left by Mendeleev in his periodic table? (any two)

Question 3 : What were the criteria used by Mendeleev in creating his periodic table?

Answer : Properties of elements are periodic function of their atomic masses.

Question 4 : Why do you think the noble gases are placed in a separate group?

Answer : It is because they are lest reactive and have their octet complete except helium which has completely filled K-shell. They have stable electronic configuration.

Answer : It is based on atomic number. Therefore, problems of cobalt and nickel, argon and potassium were solved.

Isotopes have some atomic number, therefore, they have some position.

Question 2 : Name two elements you would expect to show chemical reactions similar to magnesium. What is the basis for your choice?

Answer : Calcium and strontium, because they have some number of valence electrons.

Question 4 : (a) Lithium, sodium, potassium are all metals that react with water to liberate hydrogen gas. Is there any similarity in the atoms of these elements?

(b) Helium is an unreactive gas and neon is a gas of extremely low reactivity. What, if anything, do their atoms have in common?

Answer : (a) They are larger in size in respective periods. They can lose electrons easily. Therefore, they are highly reactive. They have one valence electron.

(b) Helium and neon have completely filled outermost shell.

Question 5 : In the Modern Periodic Table, which are the metals among the first ten elements?

Question 6 : By considering their position in the periodic table, which one of the following elements would you expect to have maximum metallic characteristic?
Ga Ge As Se Be

Answer : Be will have maximum metallic character.

Question 1 : Which of the following statements is not a correct statement about the trends when going from left to right across the period of periodic table.

a) The elements become less metallic in nature.
b) The number of valence electrons increases.
c) The atoms lose their electrons more easily.
d) The oxides become more acidic.

Answer : (c) is not a correct statement.

Question 2 : Element X forms a chloride with the formula XCl2, which is a solid with a high melting point. X would most likely be in the same group of the periodic table as

Question 3 : Which element has

Question 4 : (a) What property do all elements in the same column of the periodic table as boron have in common?

(b) What properly do all elements in the same column of the periodic table as fluorine have in common?

Answer : a) They have 3 valence electrons.

b) They have 7 valence electrons and can gain one electron to form anion.

a) What is the atomic number of this element?
b) To which of the following elements would it be chemically similar? (Atomic numbers are given in parentheses).

Answer : a) Atomic number is 17.
b) F(9) belongs to this group and is chemically similar.

Question 6 : The position of three elements A, B and C in the periodic table are shown below:

a) State whether A is a metal or non-metal
b) State whether C is more reactive or less reactive than A.
c) Will C be larger or smaller in size than B?
d) Which type of ion, cation or anion will be formed by element A?

Question 7 : Nitrogen (atomic number 7) and phosphorous (atomic number 15) belong to group 15 of the periodic table. Write the electronic configuration of these two elements. Which of these will be more electronegative? Why?

They are non-metallic elements.

Nitrogen is more electronegative than ‘P’ due to smaller atomic size.

Question 8 : How does the electronic configuration of an atom relate to its position in the Modern periodic table?

Question 9 : In the Modern periodic table, calcium (atomic number 20) is surrounded by elements with atomic numbers, 12, 19, 21 and 38. Which of these haver physical and chemical properties resembling calcium?

Answer : Element with atomic number 38 resemble with Ca(20) in physical and chemical properties due to same number of valence electrons.