Photorespiration is a process which involves oxidation of organic compounds in plants by oxygen in the presence of light.  Like normal respiration, this process also releases carbon from organic compound in the form of carbon dioxide but does not produce ATP.  Thus, it seems to be a wasteful process.  Photorespiration occurs only in C3 plant during daytime usually when there is high concentration of oxygen.

Photorespiration was first demonstrated by Dicker and Tio (1959) in tobacco and the term, photorespiration, was given by Krotkov in the year 1963.  It occurs in temperate C3 plants such as rice, wheat, barley, bean etc.  The process of photorespiration takes place in chloroplast, peroxisome and mitochondria.

Following are some of the important characteristics of photorespiration:

The process of photorespiration at the initial stage occurs inside the chloroplast.  Its primary substrate is an early product of photosynthesis, the glycolate.  Since glycolate is a 2-carbon compound the process is also termed as C2 cycle.

In presence of light, with high concentration of oxygen and low concentration of carbon dioxide in the atmosphere the photosynthetic enzyme RuBP carboxylase develops a high affinity for oxygen than carbon dioxide and it functions as RuBP oxygenase.  It catalyzes RuBP into 3 phosphoglyceric acid and phosphoglycolate or phosphoglycolic acid in the presence of oxygen.  Glyoxylate then converts into amino acid, glycine by transamination reaction.

Glycine goes to mitochondria, where two molecules of glycine interact to form one molecule of amino acid, serine along with the release of ammonia and carbon dioxide.  Serine then returns back to peroxisomes and thus contribute to the formation of glyceric acid.  Glyceric acid then passes into chloroplasts where it is phophorylated to form 3PGA.  3PGA enters into the C3 cycle of photosynthesis.

Following are the steps involved in photorespiration in C3 plant : 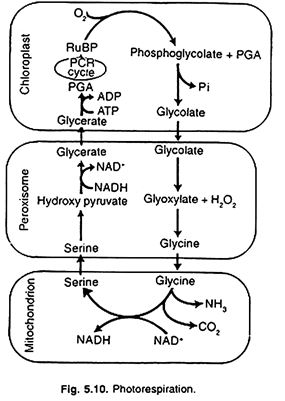 Photorespiration does not produce energy or reducing power.  Rather it consumes energy. Further it undoes the work of photosynthesis.  Thus there is 25% loss of fixed CO2.  Therefore it is a highly wasteful process.  This happens only in case of C3 plants.

C4 plants have overcome the problem of photorespiration by performing light reaction in mesophyll cells and Rubisco mediated CO2 fixation by Calvin cycle in the interior of leaves ie., in the bundle sheath cells where both temperature and oxygen are lower.

Photorespiration protects the plants from photoxidative damage by dissipating excess of excitation energy.

Following are the differences between Photorespiration and Normal (dark) respiration