Synthesis of carbohydrate by autotrophic plants from carbondioxide and water, using energy from sunlight inside green plastid chloroplast is termed as photosynthesis.

The primary photochemical act of photosynthesis involves breakdown of H2O into H+, and OH– ion in the presence of light.  It takes place inside the grana of chlorophyll.  The OH– ion reunite to form water and molecular oxygen.  Besides oxygen, light reaction gives rise to a reducing agent, NADPH2 and an energy-rich compound ATP.  The complex mechanism of light reaction can be discussed under the following subheadings:

Robert Hill in 1937 and Scarisbrick (1940) found that isolated chloroplast when illuminates in presence of water produces oxygen if some hydrogen acceptors are present in the medium.

Arnon while working on chloroplast in 1951 discovers that the splitting of water molecules releases H+ ion and coenzymes NADP accept the H+ ion .

Another discovery of Arnon in the year 1954, was that apart from carrying out Hill’s reaction, the chloroplast also synthesizes ATP in presence of light from ADP and inorganic phosphate.

The exact participation of various pigment molecules and the existence of 2 pigment systems in photosynthesis came from the study made by Robert Emerson and his co-workers.

Emerson and Lewis determine that the quantum yield of photosynthesis under different wavelength of light and found that there was a sharp drop in the region above 680 nm.  The fall in photo yield beyond red region of spectrum is termed as “red drop.” 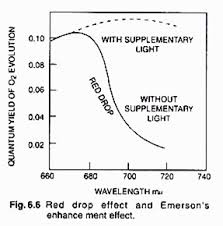 According to them, simultaneous or quick alternate giving of 2 wavelengths surprisingly gave a photosynthetic rate, higher than total rate got from 2 beams of light used separately.

The discovery of Emerson’s effect has clearly shown the existence of two pigment system.

A photosynthetic unit is the smallest group of pigment molecules which take part in a photochemical act or conversion of light energy into chemical energy.  It has a photocentre or rection centre which is fed by about 200 harvesting pigment molecules.  The photocentre consist of a special chlorophyll a molecule, P700 or P680.  Reaction centre absorbs light energy at longer wavelengths.  The harvesting molecules are of two types, antenna molecules and core molecules. 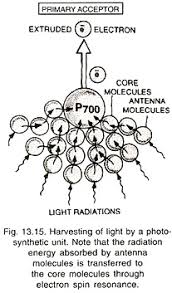 Fig: Harvesting of light by a Photosynthetic Unit

Pigment system I (PSI) or Photosystem I

It produces a strong reductant, which reduces NADP to NADPH2  (NADP+→NADPH+H+).

It mainly consists of pigment absorbing shorter wavelength of light.  It comprises of phycobillins, xanthophylls, chlorophyll b 660, chlorophyll 670 and a molecule of chlorophyll 680 (P-680) and an unidentified electron donor “Z”, a primary electron acceptor quinone (Q), plastoquinone (PQ), 4 plastoquinone equivalent, 3 manganese  molecules, chlorides and 2 cytochrome b 559.

It releases oxygen and generates a strong oxidant and a weak reductant. 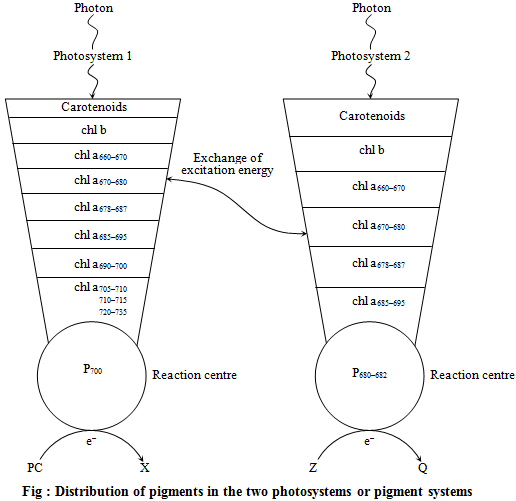 Process of synthesis of ATP and NADPH2 from ADP and NADP in the presence of light during noncyclic transfer of electrons is termed as non cyclic photophosphorylation.

It involves pigment system I (PSI) and pigment system II (PSII).  Pigment system II absorbs light and becomes excited.  The accessory pigments absorb light and transfer their energy to reaction centre P-680.  Electron from P-680 comes out due to excitation .  Quinone absorbs the electron and the chlorophyll becomes oxidized.

In the meantime, water diassociates into hydrogen and OH¯ in presence of Mn++ Cl–.  The OH¯ uses its electron to z (unknown electron donor) and becomes hydroxide radical.  Transfer of electron from z to P680 takes place. Hydroxide radical gives rise to hydrogen peroxide, which breaks into H20 and O2.

Simultaneously, PSI gets excited and the reaction centre P700ejects electrons, which goes to reduce ferredoxin-reducing substance (FRS) through a compound A (FeS).  The excited P700 immediately takes up electron from PSII through plastocyanin.

The reduced FRS transfers its electron to ferredoxin (Fd).  Electron then passes to NADP+  through Fd NADP reductase.  Reduction of NADP+ to NADPH+ + H+ takes place by utilizing elctrons coming from ferredoxin and H+ ions coming from water.

It is a process of synthesis of ATP from ADP in presence of light during cyclic transfer of electron.  Absorption of light by pigment system I (PSI) results in the excitation of its reaction centre P700, which emits electron.  Transfer of  electrons to ferredoxin-reducing substance (FRS) through A (FeS) takes place.  Reduced FRS transfers its electron to ferredoxin and gets oxidized.