The membrane system consists of many flattened fluid-filled lamellae termed as thylakoids.  Each thylakoid is made of lipid and aqueous protein layer.  The thylakoids form stacks termed as grana and each granum resembles a pile of coins. 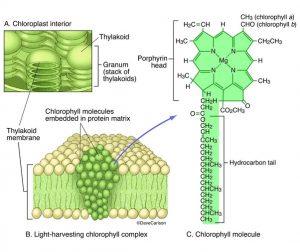 Chlorophyll structure was first studied by Wilstatter, Stoll and Fischer in 1912.  It has a head termed as porphyrin and a tail made up of long chain alcohol termed as phytol.  The head is hydrophilic (water loving), therefore in a thylakoid it is embedded in the aqueous protein layer.  But the tail is hydrophobic and is directed towards the lipid layer.

Chlorophyll molecule consists of 4 pyrrole rings.  These are arranged into a single tetrapyrrole ring called porphyrin with a magnesium atom in the centre.  It is conjugated (alternating) system of single and double bond.  Such tetrapyrrole ring structure is also present in cytochrome and haemoglobin with iron in place of magnesium.

Porphyrin ring have many side group that determine the properties of the pigment.  Chlorophyll a has a methyl group in second pyrrole ring while chlorophyll b has an aldehyde group there.  Both the chlorophyll have a long hydrocarbon side chain called phytol attached to the fourth pyrrole or porphyrin ring.

Fig: Structure of chlorophyll molecule (Chlorophyll a and b)

Carotenoids are lipid compounds which occur in almost all higher plants.  They are also present in several microorganisms.  Alongwith chlorophyll b the carotenoids are also called accessory pigments because they hand over the energy absorbed by them to chlorophyll a.

It is an accessory pigment in close association with chlorophyll in all photosynthesizing cells.  Most of the carotenoids are yellow or orange in colour present as chromoprotein in thyllakoid.  These pigments are made of two six membered rings with a highly unsaturated straight chain of hydrocarbons stretched between them.

The first carotenoid, termed as carotene was reported in carrot by Wackenroder (1831).  In general there are two major group of carotenoids- the carotene and carotenols (xanthophylls).

The carotenes are unsaturated hydrocarbons which absorb blue and green light and transmit yellow and red light.  These pigments consist of a long chain of hydrocarbons with a ring structure at each end.  β-carotene is an important carotene in association with chlorophyll in all photosynthetic organisms.  It is orange-yellow in colour.  The orange pigment of carrots is also β-carotene.

Following are some of the functions of carotenoids:

Phycobilins are another group of accessory pigments present in red and blue-green algae.  They are open tetrapyrroles which neither contain magnesium nor phytol.  They are attached to the proteins and are water soluble.  The unit consisting of protein and phycobilins is termed as biliprotein or phycobilisome.

The pigments are of two types- blue (phycocyanin, allo-phycocyanin) and red ( phycoerythrin).  Usually both these types occur together, but their proportion may vary according to species and environment.  The pigments are also useful in chromatic adaptations. Hence, they are important accessory pigments of blue-green algae, cryptomonads and red algae.

In blue-green algae and red algae, the phycobilins are present inside submicroscopic structures termed as phycobilisomes.   Like carotenoids they also have an indirect role in photosynthesis; they absorb light energy and transfer it to chlorophyll a.  Hence, they are important for photosynthesis.