A picture comprehension is usually divided into three patterns where a student might be asked to describe a picture given, or make a story out of the given picture or thirdly to express and elaborate upon thoughts and feelings suggested by the given picture.

It requires a wide range of imagination, creativity, good hold on vocabulary and the ability to sequence all the events together.

How to go ahead with a Picture Comprehension

Keeping the following points in mind will help the students to go ahead with the picture comprehension.

The idea conceived through the given picture must be the base of the composition that the student plans to write. The student must maintain the connection and the focus on the picture as well as the content.

Before the student begins writing, he/she should study the picture minutely and thoroughly and then plan out his/her content. Planning is essential while attempting picture comprehension. The student must plan out his every move starting from the introduction and continuing right til his conclusion.

As the word limit is going to range between 350-400 words, the student must try to spread out his ideas so that there is a variety of ideas in his composition.

The student must make use of his imaginative power and simple language in order to frame out his content related to the picture. 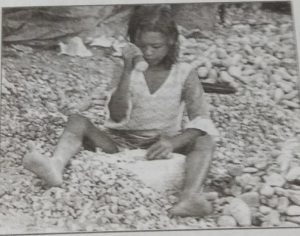 Answer : Lakshmi was the third child in the family of 5 children. Her mother was a poor labourer who worked at the nearby construction site along with her father. Lakshmi was 7 years old. She used to accompany her parents to the construction site.
One day, the manager at the construction site offered to employee Laxmi at a Meagre pay. Her parents considered it as an additional income which would support them and give their consent.
The picture of Italy portrays how Laxmi was made to work hard at breaking stones at the construction site. Even her mother and father used to work hard at the construction site toiling hard in the blazing sun from morning to evening carrying bricks and mortar from one place to another.
Lakshmi would keep breaking Stones in a corner, crying and regretting her fate. Search was her misery that in the days when she should be going to school and playing she had to survive. Search was her irony that instead of Smiles and care freeness, her face was writ large with worry for earning her bread.
Child labour is another name which can be given to this picture. It is a serious brought in the efforts to project the nation as a dynamic country. The root cause of child labour is poverty and to some extent The girl Lakshmi has become symbolic of all child labourers who are exposed to the difficulties of the world at such a tender age. It is a pity to see the coil and shoulder responsibilities which is far more than their shoulders can bear.
The girl is forced to do hazardous work without proper compensation. She is risking her life just to keep her family’s body and soul together. So tragic is her condition that she has turned into a physical and mental wreck. Her week and fragile body seems to suffer from disease.
The government should realise the guilty of the situation and take strict actions to ban child labour. However no man can work unless it is ensured that they are provided with food, shelter and education. Adopting a multi prolonged problem solving approach is required.
Furthermore, this should be incentivised by the provision of education and vocational based skills training for each child. The combination of the right information complemented by the right rewards will combat child labour and in the longer run, poverty.