Question 1 : What is planning in games and sports?

Answer : Planning is a process of development of a strategy to achieve and desire objectives, to solve problems and to facilitate action. With the help of appropriate planning in the field of games and sports, even hitherto unachievable tasks can be achieved.

Answer :  Various types of tournaments are:

i) Knock-out or Elimination tournament.

ii) League or Round Robin tournament.

Question 4 : Round Robin tournament is of two types. Name them and give one major difference between them.

Answer : There are two types of league or round robin tournaments.

i) Single League Tournament : In a single league, every team plays with every other team once.

Where, N = Number of teams.

ii) Double League Tournament : In double league, every team plays with every other team twice.

Where, N = Number of teams.

Question 5 : What do you mean by consolation tournament?

Answer : Consolation tournament are those tournaments in which an additional chance is given to the defeated team.

Question 6 : What is seeding?

Answer : Seeding is a procedure in which good teams are placed in fixtures in such a way that stronger teams do not meet each other at the very start of a tournament. In seeding, the strong teams are selected to keep them at appropriate places in the fixtures so that they should not meet in the earlier rounds.

Answer : Bye is a privilege given to a team which is decided generally by seeding it or by draw of lots.

Answer : Byes can be applied equally to single person competitions and team sports as well as to single game eliminations and best of series eliminations. If the number of competitors or competing teams are not a multiple of 2 then some teams may get ‘bye’.

Answer : For for giving bye:

Question 10 : What do you mean by league tournament?

Answer : A league tournament is also known as round robin tournament. In this type of tournament, each contestant meets all other contestants in turns.

Answer : The two objectives of intramurals are:

i) To provide incentive, motivation and opportunity to learn various skills.

Question 12 : What do you mean by extramural?

Answer : Extramural means ‘between institutions’ or we can say that these competitions are conducted between the players of two or more institutions.

Question 13 : What does the school intend by stating that, “only such students shall participate in the Basketball Intramurals who have not represented the school in Basketball in the past and minimum 10 substitutions shall be compulsory.”

Answer : To promote mass participation and to explore the hidden talent of the students.

Answer : The names of the various committees are:

Answer : The importance of tournaments are:

i) Source of recreation : A large number of people go to watch various games and sports for getting recreation. Sports tournaments provide ample recreation to the spectators.

Question 17 : What do you mean by knock-out tournament? Draw the fixture of 21 teams on knock-out basis.

Number of teams in upper half

Number of teams in lower half

Total number of byes = Next power of two – total teams 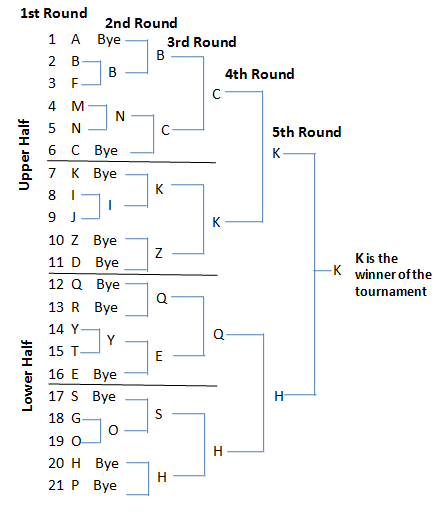 Answer : A single elimination tournament (also called an Olympic system tournament) or a knock-out tournament is a type of elimination tournament where the loser of each bracket is immediately eliminated from the tournament. In some such tournaments, consolation or ‘classification’ contests are subsequently held among those already defeated to determine the awarding of lesser places. For instance, a third place playoff.

The disadvantages of knock-out tournament are:

Question 19 : What are the advantages of knock-out tournaments?

Answer : The advantages of knock-out tournaments are: