Community is a group of several species living together with mutual tolerance and beneficial interactions in a natural area . In a community, organisms share the same habitat growing in an uniform environment. A forest, a grassland, a desert or a pond are natural communities.  In a community only living entities are considered.  But if non living i.e., abiotic factors together with the living i.e., biotic entities are also considered then, we would be dealing with an ecosystem rather than a community.

Characteristics of a community

Like population a community too has its own characteristics, which are not shown by its individual component species.

Community is described in terms of major growth form as trees, shrubs, herbs, mosses,etc.  In each  growth form as in trees, there may be different kinds of plants such as trees with broad leaves, evergreen trees etc.  These different growth forms determine the structural pattern of a community.  According to the mode of arrangement of the various growth forms, the community exhibit; zonation ( horizontal layering) as well as stratification (vertical layering).

In a community all the species are not equally important in terms of sufficient abundance. They influence other in terms of number and biomass such species are termed as dominants.  They also determine the animal population.

Each community has its own developmental history.  The biotic community in nature changes with passage of time.  The successive replacement of community in an area over a period of time is termed as ecological succession.

Succession is community controlled phenomena which results due to the action and co-action on living organism.  Physical environment also plays an important role in the rate, direction and optimal limit of change.

Nutritionally, each community, i.e., a group of autotrophic plants as well as heterotrophic animals, exists as a self sufficient, perfectly balanced assemblage of organism.

Communities are also classified on the basis of their water and light requirements and other environmental conditions.  In terms of the general growth, composition, shape of vegetation and organisms associated with them, communities may be classified as forest, desert, grasslands, tundra and so on or as hydrophytes, mesophytes, xerophytes, heliophytes and so forth.

Series of changes result in the development of a relatively stable community which maintains its structure and influences the climate of the area. Such a stable and mature community is termed as a climax community, while communities of successional stages are termed as seral communities according to Clements (1916).

The synthetic characters are based upon data obtained from analytical character which can be calculated.

Qualitative character of a community:

Physiognomy is a combination of the external appearance of vegetation, its vertical structure, and the growth forms of the dominant taxa.

A single term can express such a characteristic appearance .  For example, a simple look to such a community of plants where larger trees are dominant with some shrubs, would tell that it is a forest. Similarly on the basis of appearance it may be a grassland, desert etc.

Phenology is the scientific study of seasonal change i.e., the periodic phenomenon of organisms in relation to their climate.  Different species have different periods of seed germination, vegetative growth, flowering and fruiting, leaf fall, seed and fruit dispersal etc.  Such data for individual species are recorded.  A study of the date and time of these events is termed as phenology.  In other words, phenology is the calendar of events in the life history of the plants.

Arrangement of plants of different species in different vertical layers in order to make full use of the available physical and physiological requirements is termed as stratification. 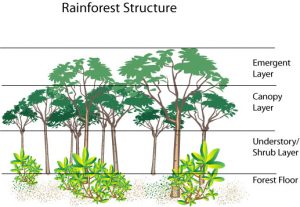 Organisms, particularly plants occur in smaller patches or groups, differing in number at each place. Abundance has five arbitrary groups, depending upon the number of plants.  The groups are very rare, rare, common, frequent and very much frequent.

It denotes the proximity of plants to one another.  Plants generally grow as isolated individuals, in patches, colonies or groups.  Plants of some species grow better when nearer to each other and produce thick population.  Others become weak or die in such an association.  Species with same density, may differ in sociability values.  Thus sociability expresses the degree of association between species.  Braun Banlquet (1932) used following five sociability groups:

S1: Plants (stems) found quite separately from each other, thus growing singly.

S3: Many smaller scattered groups at one place.

S4: Several bigger groups of many plants at one place.

This is the capacity of normal growth and reproduction, which are important for successful survival of species.  The vitality depends upon weight of species.  In plants, stem height, root length, leaf area, leaf number, number and weight of flowers, fruits, seeds etc. determine the vitality.  On this basis plants are classified into following five different vitality groups.

A life form is “the sum of the adaptation of the plant to climate”.  Raunkiaer considered that the way in which different species overcome the adverse environmental conditions determine their limits of distribution.  On the basis of the position of the perennating buds on plants and the degree of their protection during adverse conditions, Raunkiaer classified the plants into following five broad life form categories.

Phanerophytes:  The sales cover the buds and are present high up on the plants. These life forms include trees, shrubs and climbers generally common in tropical climates.  Depending upon the size phanerophytes may be megaphanerophytes, mesophanerophytes, micro and nanophanerophytes.

Chamaephytes:  Their buds are close to the ground surface. They are common at high altitudes e.g., Trifolium repens.

Hemicryptophytes:  Their buds are present under soil surface, protected by the soil itself.  They mostly occur in the cold temperate zones e.g., Lichens, fungi, etc.

Therophytes:  These are seasonal plants, completing their life cycle in a single favourable season and remain dominant throughout the rest unfavourable period of year in the form of seeds. They are common in deserts.

The frequency is expressed as a percentage. The following relationship estimates the frequency:

Density is the numerical strength of organism in a community per unit area. Unit area may be a square metre or acre. In frequency and density study, the size of the sample quadrat is very important.

The above ground parts of the plant cover a certain area. If we demarcate this area by vertical projection, the area of the ground which the plant canopy covers is termed as canopy cover or foliage cover.  Besides the canopy cover, the basal or cross -sectional area of tree trunks is  also important. The formula π r2 measures the basal area or basal cover in trees .

Canopy cover is usually expressed as percentage.  Plant with greater foliage cover can intersect more solar energy and in a forest community bring about bring more shade influencing the growth of underlying vegetation.  In case of grasses, we measure the basal area at ground level or about 2 centimetres above the soil surface.  Following is the formula to measure the relative dominance: