Thus pleitropy is a phenomenon where a single gene contributes to multiple phenotypic traits. According to Fairbanks and Rytting (2001) the seed coat colour gene was not only responsible for seed coat colour but also for flower colour and axil pigmentation.

Following are some of the examples of pleiotropy:

Y (yellow coat) and y (non-yellow coat) controls the mouse coat colour. A cross between two heterozygous yellow mice produces yellow and brown mice in a ratio 2:1 and not 3:1.

YY combination is lethal and causes the death of such a mouse. Hence, in this example the genes affect the coat colour as well as lethality of a mouse.

Marfan’s syndrome is another good example. A defect in the critical component of the connective tissue (the protein fibrillin, is defective) causes this disease. This mutation of a single gene causes abnormalities in the skeleton, eyes and cardiovascular systems.

A single gene is involved in multiple pathways. For example, tyrosine an amino acid is needed for general protein synthesis. It is also a precursor for several neurotransmitters (example, dopamine or epinephrine), the hormone thyroxin and the pigment melanin. The mutations in this gene, affecting tyrosine synthesis would, therefore, affect multiple body systems. These and such other examples affecting multiple systems are termed as indirect or secondary pleiotropy.

Phenylketonuria, which occurs in humans is another example. Mutation in the gene that codes for the enzyme phenyl alanine hydroxylase (i.e., single gene mutation) causes this disease. This expresses itself by producing mental retardation and a reduction in hair and skin pigmentation.

Mendel’s work showed the presence of two alleles for each character both producing contrasting phenotypes. The tall pea plant is 6-7 feet tall while dwarf plant is ¾-1 foot tall. The distinction of height is this case is very sharp. Moreover, this pair of alleles occurs at a specific, single place on homologous chromosomes.

Consider the human height. Can there be two sharp categories sharp such as tall and dwarf? Instead there is a continuous phenotypic variation. Two simple group such as tall and dwarf cannot be recognised. This is because there are no distinct alternative forms for height. There are several merging variations in height. We observe similar situation for human skin colour, human intelligence, yield of milk and meat in animals, kernel colour in wheat, cob length in maize, etc.

Such characteristics determined by the interaction of genes at several loci (on different chromosomes at different places on a single chromosome) are collectively termed as polygenic or multiple factor inheritance. In this type, inheritance is controlled by many genes, each with cumulative effect. The intensity of a character is dependent upon the number of dominant genes. Hence, it is also termed as quantitative inheritance. The dominant polygenic alleles which contribute to the expression of a character are termed as contributing alleles and the recessive polygenic alleles are termed as non contributing alleles.

Skin colour in humans is the best example of polygenic inheritance. Davenport and Davenport (1910) have shown that skin colour is a polygenic trait produced by at least three separate genes located at a minimum of 3 loci.

Assume that 3 ‘dominant’ capital letter genes (A, B and C) produce dark pigmentation because of more melanin production. The ‘recessive alleles’ of these three genes (a, b and c) control light pigmentation because of lower amounts of melanin production. The words dominant and recessive do not truly represent dominant and recessive as studied by Mendel. A genotype with all dominant genes (AABBCC) has the maximum amount of melanin and, therefore, the skin would be very dark. A genotype with recessive genes (aabbcc) has the lowest amount of melanin and hence would produce very light skin.

Each dominant gene produces one unit of colour, so that a wide range of intermediate skin colours are produced, depending on the number of dominant genes in the genotype. For example, with three dominant genes and three recessive genes (AaBbCc) a person has a medium amount of melanin and intermediate skin colour. This genotype is characteristics of a mulatto (a person of mixed white and black ancestry, especially a person with one white and one black parent). 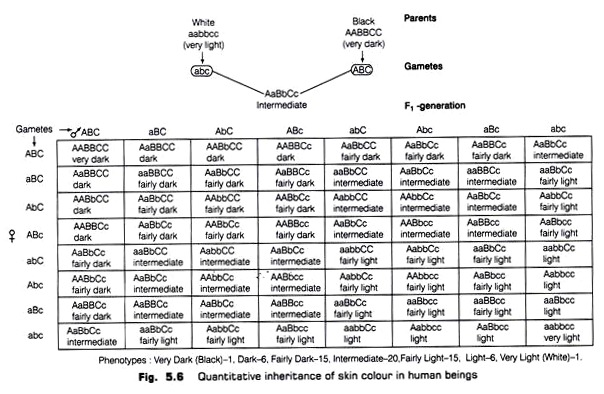 In a cross between two mulatto genotypes (AaBbCc × AaBbCc), each parent produces 8 different types of gametes and these gametes combine with each other in 64 different ways resulting in a total of 7 skin colours.

Multiple gene (i.e., polygenic) inheritance explains many plant and animal traits where there is a wide variation between extreme phenotypes, with most individuals having intermediate phenotypes.

Thus the result of F2 generation obtained out of a cross between very dark (AABBCC) and very light (aabbcc) coloured skin shows the following:

1. There are only a few parental phenotypes.

2. The shade of the skin colour depends upon the number of contributing (i.e., dominant) genes being quantitative.