Polyploidy is the state of a cell or organism having more than two sets of chromosomes. There are mainly three different kinds of polyploids, namely, autopolyploids, allopolyploids and segmental allopolyploids.

Origin and production of autopolyploids:

Since polyploids are normally larger and more vigorous, their role in crop improvement has been realised and techniques developed for artificial induction of polyploidy. Polyploid is mainly induced by treatment with aqueous solution of a drug termed as colchicine. This drug has the property of arresting and breaking the spindle so that a cell division without cell wall formation may be affected leading to doubling of chromosome number. The concentration of aqueous solution of colchicine may vary from 0.01%  to 0.50 % and the treatment may be given in one of the following manners:

1. Soaking seeds for different durations in aqueous solution of  colchicine is an effective method .

2. Injections of  colchicine solution  at seedling stage, into cortex tissue with the help of a hypodermic needle is another effective method.

3. Axillary bud treatment is also effective. Since bud is meristematically active, soaking cotton in  colchicine and applying on the bud with continuous dropping of solution on the bud leads to the induction of polyploidy in the branch arising from the treated bud.

In an autopolyploid, there will be more than two sets of homologous chromosomes. This leads to formation of multivalents instead of bivalents as found in diploids. An important difference exists even between autotriploid and an autotetraploid, because while in the latter normal disjunction is possible giving rise to diploid gametes, in triploids it is not possible. In an autotriploid, there are three sets of homologous chromosomes. If these three sets pair normally , trivalents cannot disjoin normally and will either disjoin 2:1 chromosome to two poles or will disjoin 1:1 leaving one chromosome as a laggard .The number of chromosomes in gametes of triploid organism, therefore will vary from n to 2n.

In autotetraploids since there are four sets of chromosomes, there is the formation of quadrivalents, which disjoin in a normal 2:2 manner giving diploid gametes.  Rarely however a quadrivalent may disjoin 3:1 or may leave a chromosome as a laggard at anaphase 1. Therefore autotetraploids also have a certain degree of sterility, although it will not be as high as in autotriploids.

Allopolyploids are those whose chromosome sets are derived from two different genomes. Such polyploids are the result of doubling of chromosomes in F1 hybrids derived from two distinctly different species. The commonest example of polyploidy is Raphanobrassica. Russian geneticist G.D. Karpechenko (1927) made a cross between Raphanus sativus (2n=18) and Brassica oleracea (2n=8).  The F1 hybrid was sterile, because chromosome sets of both these plants were dissimilar and could not pair during meiosis.

Some allopolyploids were also produced artificially. F1 hybrid of these were sterile as usual due to lack of pairing. After colchicine treatment the plants were fertile. Following are some of the common examples: 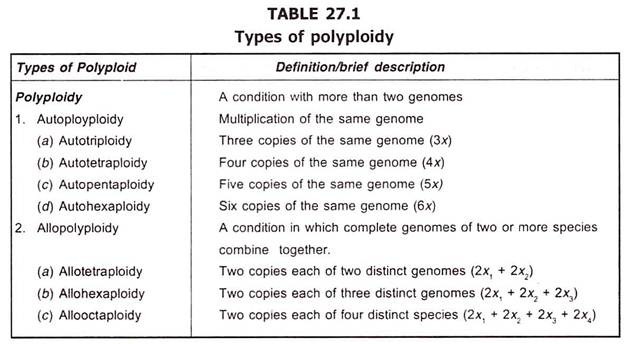