The process of development of mature embryo from zygote is known as embryogeny.  After fertilization, the  primary endosperm  nucleus begins to divide to give rise to a multicellular endosperm.  The fertilised egg grows into an embryo.  The growth of the embryo slows down because the zygote enters a period of dormancy after fertilization.   The period of dormancy may vary from few hours to several days. The endosperm grows by means of food supplied by the parent plant and in return it nourishes the embryo.

The two cells formed by the basal cell divide by transverse division to produce 6 to 10 cells long suspensor.  Of these, the upper most cell is swollen and forms a vesicular cell while the lower most cell of the suspensor is called hypophysis.  Hypophysis forms part of the radicle and root cap.

The growth of the suspensor  pushes the growing embryo into the endosperm where abdundant food is available.  The suspensor  ultimately disintegrates.

The two cells formed by the apical cell divide by another vertical wall at right angles to the first division forming a four-celled quadrant. All the four cells of the quadrant divide by a transverse wall producing an eight-celled embryo, called octant.  These cells are arranged in two tiers of four each.  Four cells of the lower tier give rise to the plumule and cotyledons while the upper four cells produce hypocotyl.

Each of the eight cells of the octant divides periclinally forming a 16-celled embryo known as globular embryo.  It has eight peripheral and eight central cells.  The peripheral cells divide anticlinally and form a single-layered dermatogen.  It eventually gives rise to epidermis.  The derivatives of the inner eight cells differentiates into periblem and plerome.  The periblem forms the ground meristem whereas the plerome gives rise to the procambium of the hypocotyl and cotyledons.

The globular embryo becomes heart shaped due to the differentiation of cotyledons at its distal end.  The mature embryo consists of an axis bearing two cotyledons.  The tip of this axis above the cotyledonary node, has the plumule which represents the apex of the embryonic shoot.  The plumule usually consists of an apical meristem together with several embryonic leaves.  On germination, plumule forms the shoot.  The basal tapering end of the axis is the radicle which develops into primary root when the seeds germinates.

Example of embryogeny in dicotyledons is that of Capsella bursa, a member of Brassicaceae. 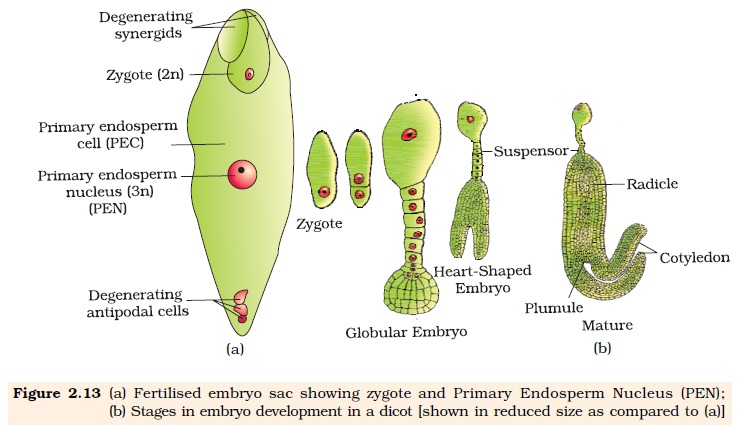 The remaining part of the coleoptile develops from the cells derived from the basal cell.   Monocots have only a single cotyledon which is situated on one side of the embryonal axis.  The part of the  embryonal axis below the level of scutellum is the radicle.   It is enclosed in an undifferentiated sheath, called coleorrhiza. 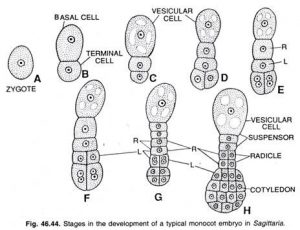 Endosperm developes from the primary endosperm  nucleus which is formed as a result of the fusion of two polar nuclei with one of the male gametes.  It is a nutritive tissue that supplies food material to the growing embryo.  In angiosperms, the endosperm is generally triploid.

Depending upon the mode of its formation, angiospermic endosperm is of three types – nuclear, cellular and helobial.

Nuclear endosperm:  In this type of endosperm, primary endosperm  nucleus divides freely into large number of nuclei without any  immediate cell wall formation.  The endosperm, thus, consists of large number of nuclei, arranged mostly towards the peripheral region of the embryo sac.  At a later stage, wall formation begins from periphery and progresses towards the center.  It is mostly found in the members of Polypetalae (e.g., Arachis hypogea, Primula, Citrus, Mangifera, Malva, Glycine max etc.). Helobial endosperm:  This type of endosperm is an intermediate between cellular and nuclear types.  The division of primary endosperm  nucleus is followed by wall formation which results in the formation of two chambers – micropylar and chalazal chambers.  Free nucleus division occurs in both the chambers.  These divisions are not followed by wall formation.  Such type of endosperm is characteristics of Helobiae, an order of monocotyledons, e.g., Asphodelus.