Recombinant DNA technology is the process of removing the desired piece of DNA from one organism and incorporating it into chromosomal DNA of another organism. It is also termed as genetic engineering.

The tools include enzymes termed as restriction endonucleases and also DNA polymerases and DNA ligase. The procedure also uses vectors as vehicles to carry foreign DNA into a host cell or living system. All these form tools for recombinant technology.

The credit for isolation of first endonuclease goes to D. Nathans and H. O. Smith (1970). They were the Nobel Prize winners in Physiology and Medicine for this discovery in 1978. These enzymes are now variously termed as ‘molecular scalpels’, ‘molecular scissors’, ‘chemical scalpels’ etc.

The DNA segments cut by restriction enzymes are pallindromic, i.e., the nucleotide sequence of these DNA pieces read the same both backwards and forward, for example, Madam.

The naming of these enzymes follows certain norms. These are named after the bacterium from which these are isolated. The first letter of the name comes from the genus of the bacterium (in italics), then comes the first two letters of the species (also in italics), next is the strain of the organism and the last is the roman numeral indicating the order of discovery. For example, the enzyme Eco RI was isolated from the bacterium Escherichia (E) coli (co), strains RY (R) and was the first endonuclease (I).

The cut produced by restriction endonuclease is important. The resultant DNA sequence may either have blunt ends or sticky ends.

Many restriction enzymes produce blunt ends or flush ends which leave both strands of DNA exactly at the same nucleotide position, in the centre of recognition site. It cuts both DNA strands producing blunt ends.

Sticky or cohesive ends occur when restriction enzymes do not cut DNA at the same nucleotide position but cut the recognition sequence unequally. This produces short single stranded overhangs at each end. These are termed as sticky ends. The stickiness helps enzyme ligase to make the DNA pieces to join. 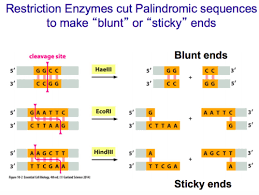 Other Enzymes Used in Cloning

The enzyme is useful in removing the phosphate group from 5’ end of a DNA molecule so that a free 5’ as hydroxyl group is available for ligation. It, therefore prevents unwanted self ligation of vector DNA molecules in cloning.

Another important tool for recombinant technology is the organism for cloning termed as vector. The vector carries a foreign DNA sequence for producing its multiple copies. Bacterial plasmid and bacteriophages are the most useful vectors. This is because of the following reasons: 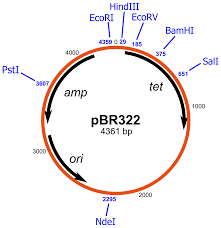 Following essential features should be present in a DNA molecule to act as a cloning vector:

This is a DNA sequence which serves as a starting point for replication. When a DNA fragment associates with ori, foreign DNA into the vector would also replicate inside the host cell. Some vectors possess origin which  favours formation of high copy numbers and hence preferred.

Vector should also include a selectable marker which is a gene permitting identification of transformants from non transformants. Common selectable markers in E. coli include genes encoding antibiotic resistance such as ampicillin resistance or enzymes such as beta galactosidase (product of z gene of lac operon). A colour reaction is helpful in the identification of these genes.

The process of selection of transformant or recombinant due to antibiotic inactivation is very complex and involves time consuming procedures. A simple and alternative method, therefore, is necessary. A technique termed as insertional inactivation was helpful in overcoming this difficulty.

Insertional inactivation is a technique used in recombinant DNA engineering where a plamid (such as pBR322) is useful to disable expression of a gene.

The inactivation of a gene is brought about by inserting a fragment of DNA into the middle of its coding sequence. Any future products from the inactivated gene will not work because of the extra codes added to it.

An example is the use of pBR322, which has the genes that respectively encode polypeptides that confer resistance to ampicillin and tetracycline antibiotics. Hence, when a genetic region is interrupted by integration of pBR322, the gene function is lost but new gene function is gained.

Vector should possess a unique recognition site that would allow particular enzyme to cut only once. The restriction enzyme recognizes this site. If is there are more than one recognition sites in the vector, several fragments would be produced.

pBR322 has genes for resistance against two antibiotics (tetracycline and ampicillin), an origin of replication and a variety of restriction sites for cloning of restriction fragments obtained through cleavage with a specific enzyme.

The plasmids carrying no insert on the other hand, will be able to grow in media containing one or both the antibiotics. In this way the presence of resistance genes against ampicillin and tetracycline allow selection of Escherichia coli colonies transformed with plasmids carrying the desired foreigns cloned DNA fragment.

The use of tools finally results in the formation of recombinant DNA. Recombinant DNA thus formed needs to be multiplied inside living system or a host. Many types of host cells are available for this purpose. The choice of host, however, depends upon the purpose of cloning E. coli, yeast, animal and plant cells have been variously used. E. coli is the most commonly used organism in recombinant DNA technology. It has many advantages, such as:

Yeasts too are very useful in  recombinant DNA technology because of the following reasons: