Ribonucleic acid or RNA is present in all the living cells. It occurs in the cytoplasm as well as in the nucleus. Ribonucleic acid is a single chain poly-ribonucleotide which functions as carrier of coded genetic or hereditary information from DNA to cytoplasm. It takes part in protein and enzyme synthesis. It contains 70-12000 ribonucleotide joined end to end.

The axis or backbone consists of alternate residues of phosphate and ribose sugar. Phosphate combines with carbon 5′ of its sugar and carbon 3′ of next sugar. It is similar to the arrangement occurring in DNA strand. Nitrogen bases are attached to sugars at carbon 1′ of the latter.

There are four types of nitrogen bases- adenine (A), guanine (G), cytosine (C) and uracil (U). There are 6 types of RNAs- ribosomal, transfer, messenger, small nuclear and small cytoplasmic.

Following are the different types of Ribonucleic acid

RNA is generally involved in protein synthesis but in some viruses, it also serves as a genetic material. Therefore, there are two major types of RNA-genetic RNA and non genetic RNA.

This type of RNA is present in cells where DNA is genetic material. The DNA template synthesizes the non genetic RNA. It is of the following types:

It carries genetic information present in DNA. Messenger RNA constitutes about 5 to 10% of the total RNA present in the cell. The molecular weight varies from 50,0000 to 2,000,000.

mRNA  attaches to the ribosome. tRNAs are induced to bring amino acids in a particular sequence according to the sequence of codons present over mRNA. mRNA has methylated region at the 5′ terminus. It functions as a cap for attachment with ribosome. Cap is followed by an initiation codon (AUG) either immediately or after a small non coding region. Then there is a coding region followed by termination codon (UAA, UAG, or UGA). There is then a small non coding region and poly A area at the 3′ terminus. An mRNA may specify only a single polypeptide or a number of them. The former is termed as monocistronic. The latter is termed as polycistronic.

Polycistronic  mRNA is more common in prokaryotes. Eukaryotic mRNA is usually monocistronic. The lifetime of mRNA is also variable. In some lower forms it is from a few minutes to a few hours. On the other hand the mRNAs of higher forms seem to have a long life. It is several days in case of young red blood corpuscles which continue to form haemoglobin even when nucleus has degenerated.

mRNA carries coded information for translation into polypeptide formation. Through reverse transcription it can form compact genes which are useful in genetic engineering. It has a cap region for attachment to ribosome.

Some of its types (23S, 28S) are the longest of all RNAs. As the name indicates rRNA is a constitute of ribosomes. Here it lies coiled in between and over the protein molecules. Depending upon their sedimentation coefficient, RNAs of eukaryotes are of four types- 28S, 18S, 5.8S and 5S. Prokaryotic ribosomes have three types of RNAs- 23S, 16S and 5S.

rRNA is transcribed in the form of a longer chain of 45S in eukaryotes and 30S in prokaryotes. In eukaryotic transcription the arrangement in 5′ →3′ direction is 18S- 5.8S-28S. 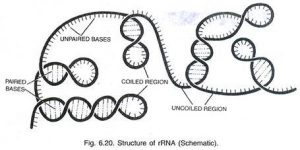 It is also termed as soluble or sRNA. These are the smallest RNA molecules with 70-85 nucleotides and sedimentation coefficient of 4S. They form about 10 to 15% of the total cell RNA. The molecular weight of tRNA varies from 23,000 to 30,000. They carry amino acids to the site of protein synthesis.

There are over hundred types of tRNAs. The nitrogen bases of some nucleotides undergo modification, e.g., pseudouride (Ψ), dihydroxyuridine (DHU), inosine (I). This causes coiling of the otherwise single stranded tRNA into L-shaped form (three dimensional, Klug, 1974) or clover like form (two dimensional, Holley 1964). About half of the nucleotides are base paired to produce double helix segments.

Anticodon loop: It consists of three nitrogen bases for recognising and attaching to the codon of a mRNA.

T Ψ C loop: It contains pseudouridine. The loop is thesite for attaching to ribosomes.

Extra Arm: It is a variable site arm or loop which lies between T Ψ C and anticodon. 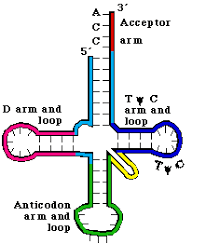 tRNA is adaptor molecule which is responsible for transferring amino acids to ribosomes for synthesis of polypeptides. There are different tRNAs for different amino acids. They carry specific amino acid at particular points during polypeptide synthesis as per codons of mRNA.

Anticodons of tRNAs recognises the codons.  Aminoacyl synthetase enzymes are helpful in recognising specific amino acids . They hold peptidyl chains over the mRNAs.