Role of k+ in stomatal movement:

Imamura and M. Fujino (1959) found a direct correlation between stomatal movement and K+ ion concentration of guard cells. Fujino proposed that stomatal opening and closing are a result of an active transport of K+ ion into the guard cells.

Opening of stomata in light:

Stomata open in light due to following reactions.

Closing of stomata in dark:

Closure of stomata in darkness is due to the following reactions: 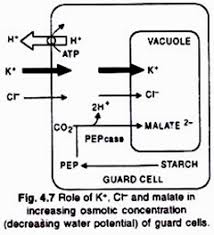 Levitt (1974) gave the  detailed process of opening and closing of stomata basing on active K+ ion transport theory. Levitt explained the influx of K+ in the guard cells and their role in the stomatal movement.  He demonstrated a relationship between stomatal opening and accumulation of K+ ions.  According to the hypothesis, pH of the guard cells rises due to active uptake of H+ ions by guard cell. 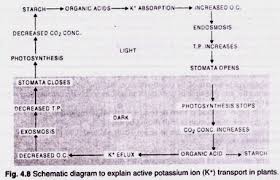 Stomata opens in the light.  It is because in light , due to photosynthesis the carbondioxide

Stomata opens shortly after exposure to light.  It is because concentration of carbondioxide in the guard cell decreases and conversion of sugar into starch occurs.  The blue and red wavelengths of light are most effective.

Stomata are partially or completely closed under water deficient conditions.  Water content of leaf is high when stomata opens.

pH of the guard cells:

The stomata open with the rise in pH of guard cells and close when pH decreases.