Root is the descending organ of the plant, which grows away from light.  It is usually white in colour in young stage and later on, may become brownish.  It usually does not bear leaves or buds, with certain exception like the root of sweet potatoes, wood apple, etc, which bear buds for vegetative propagation.

The root bears unicellular hairs, with the help of which it can absorb water from the soil.  In roots, nodes and internodes are not differentiated.  It usually possesses a protective covering at the tip, known as root cap. 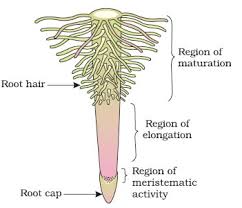 Fig: Regions of a typical root

Roots are broadly classified into normal roots and modified roots.  This classification is based on their function, but according to their origin, each of them again fall into two types – tap root and adventitious root.

Foliar roots:  Roots which develop from the leaves are known foliar roots.  They are usually developed from the basal portion of the petiole, when an isolated leave is kept immersed in water for a few days.  Leaves of sweet potato easily produce such foliar roots.

In addition to absorption and conduction of water, both the tap root and adventitious roots serve many other specialized functions.  Such roots are called modified roots.

The main functions of these roots are to store food material and they are as follows: 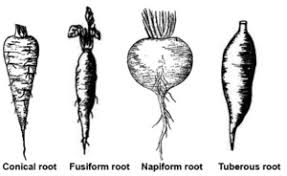 Based on the function, they are classified into the following categories: 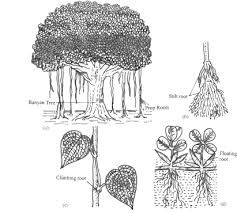 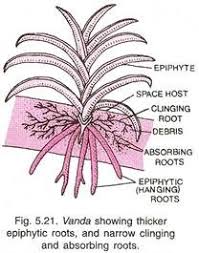